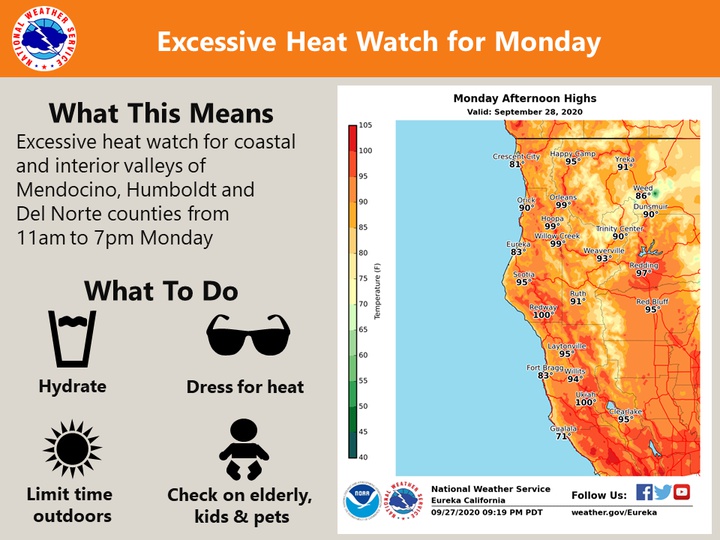 The National Weather Service had issued both a heat advisory and red flag warning on Monday.

A heatwave fueled by easterly winds that have fanned flames in much of California shattered a 99-year record in Crescent City on Monday.

Temperatures reached 95 degrees at the Del Norte County Regional Airport, breaking the old record of 89 degrees set on Sept. 28, 1921, National Weather Service meteorologist Matthew Kidwell told the Wild Rivers Outpost on Tuesday. Yesterday’s high was also 2 degrees shy of the all-time record of 97 degrees set twice, once in 1919 and again in 1939, he said.

“The station has moved around a little bit. It wasn’t always at the airport,” Kidwell said. “So the fact that we broke the record at the airport is even more impressive.”

Heat records in Crescent City have been difficult to break because in previous years the weather station had been located about a mile or two inland from its current location, Kidwell said.

The airport’s record-breaking high Monday is also noticeable in that the coast was a degree warmer than Gasquet. The mountain community reached a high of 94 degrees on Monday, Kidwell told the Outpost.

The National Weather Service had issued a heat advisory Monday for Northwestern California and red flag warnings for the interior. Easterly winds high in the atmosphere and on the surface drove hot air to the coast, pushing the marine layer out to sea, he said.

The red flag warning was issued in association with those strong easterly winds and hot temperatures creating high fire danger. That warning was lifted at about 8 p.m. Monday.

Currently, though it’s still moderately warm in Crescent City, about 76 degrees, those easterly winds have weakened, Kidwell said. The marine layer is expected to return on Wednesday bringing cooler temperatures of about 60 degrees to the area, he said.

Meanwhile, despite the high fire danger, no movement or growth was reported on the Slater Fire inland, according to a Tuesday update on InciWeb. Crews were able to hold containment lines, however high temperatures are expected to continue to dry out fuels through the rest of the week, according to the update.

The Northern Rockies Team 2 Incident Management Team will hold a virtual public meeting at 6 p.m. tonight. The meeting will be streamed live on Facebook.

Crews will continue to improve and hold containment lines from the California-Oregon border on the west side of U.S. 199 east to the Sucker Creek area, according to the update. At the fire’s north end, crews are making progress mopping up and constructing direct containment lines due to increased humidity and natural barriers that have slowed fire activity.

Firefighters have protected and “triaged” more than 2,700 structures in Josephine County, Oregon, according to the InciWeb update.

Fire crews also made good progress on the Devil Fire despite Monday’s red flag warning, according to the update.

A total of 1,170 personnel are battling the fire currently. The Slater Fire carries an estimated containment date of Oct. 15.