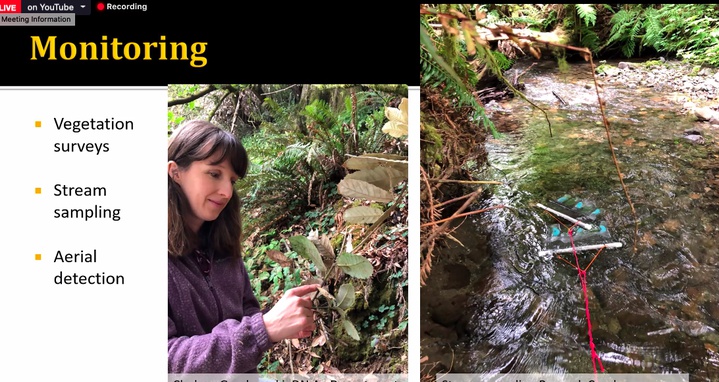 Chelsea Grochowski, an employee with the county agricultural department, takes a vegetation sample after sudden oak death was discovered off North Bank Road. Image courtesy of the UC Cooperative Extension

It also has the potential to have a detrimental impact to the region’s conifer species such as Douglas fir as well as its tanoak population, Valachovic said.

“As it’s exhibited in the United Kingdom, where they grow many commercial conifer species by plantation, including several species that are native to Northern California, they’ve seen pretty substantial mortality,” she said, showing an image of a Japanese larch plantation with canopy discoloration as well as a picture of a Douglas fir seedling damaged by sudden oak death. “It’s also known to cause damage to at least smaller diameter Douglas fir trees and we’re watching to try to learn more about what it might do to some of our other conifer species.”

The presence of sudden oak death means Del Norte County has been added to a list of others in California with additional quarantine regulations as a result, Valachovic said.

“Where we’ve confirmed it is relatively close to U.S. 101 on 197,” she said. “We don’t know how (the European strain) will behave in California. This pathogen has always provided some tricks — it’s difficult to predict.”

Del Norte Agricultural Commissioner Justin Riggs said his department has been preparing for a new quarantine program to control the disease’s spread. This could add 102 to 200 staff hours a year to the existing departmental work load, he said.

But though many in the agricultural industry are concerned about sudden oak death, Riggs said, impacts to local Easter lily bulb growers may be relatively minor.

“An agreement to allow bulbs to enter Canada has been worked out in advance and is under final review right now — all indications are that it will go forward as planned,” Riggs said. “Our bulb growers will also need to sign standard compliance agreements in order to ship their bulbs interstate. Neither of these types of agreements will impose a significant burden on them since their existing practices already mitigate the risk of spreading sudden oak death. An example of what will occur is that the growers will now need to make sure a copy of their federal shipping authorization accompanies each shipment.”

Discovery of sudden oak death in Del Norte also shouldn’t have a major impact to local nurseries that are already operating, Riggs said. However, new nurseries may face a challenge if they want to ship their products, he said.

Valachovic said she worked with a team of scientists, including Riggs and CalFire’s Chris Lee, chair of the California Oak Mortality Task Force, sampled vegetation and local streams and conducted helicopter surveys to confirm whether or not the disease was present. 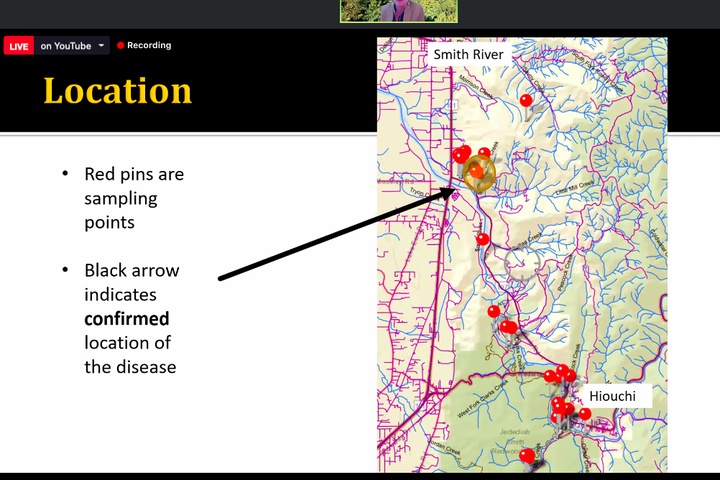 This map shows where sudden oak death mortality has occurred in Del Norte County. Courtesy of the UC Cooperative Extension

They discovered that sudden oak death is present and confirmed that die-off was occurring along North Bank Road close to Little Mill Creek and its connection with U.S. 101 near Smith River, Valachovic said.

“This is a concern because this introduced plant disease is very aggressive on tanoak and leads to expansive tanoak mortality,” she said, showing pictures of dead tanoaks in Humboldt and Curry counties. “There are years where (there is) fairly aggressive mortality and there are years where it can be quiet. It responds to warm wet conditions. That’s when you see the greatest expansion.”

Sudden oak death reproduces via spores and has more than 100 hosts of both native and common garden plants, Valachovic said. Hosts can include rhododendrons and ferns. Some plants are super spreaders and some are typhoid Marys, providing the perfect environment for quick reproduction, she said.

There are other plants that, though they experience some irritation and die back from sudden oak death, isn’t a major vector for the pathogen, Valachovic said. However, once established, sudden oak death spreads quickly.

“What we’ve seen in Humboldt County is around growth rate of 1,500 acres a year since it was established in 2004 with little to no management following since then,” she said. “So, we’re dealing with something that can move rather quickly and rather significantly.”

District 3 Supervisor Chris Howard thanked Valachovic, Riggs and Lee for their work in determining the extent of the disease in Del Norte County. He noted that sudden oak death has the potential to be disastrous to the community’s timber resources.

“Aggressive treatment efforts are definitely the right approach,” he said. “If we can get a handle on this disease in and around that area and stop its spread, this would be extremely important.”

Howard’s District 4 colleague, Board of Supervisors Chairman Gerry Hemmingsen noted that it was a matter of when the sudden oak death would show itself in the area.

“It’s too big of an item to put a mask on like we do with COVID, but maybe we can come up with something that would help stave this off,” he said.