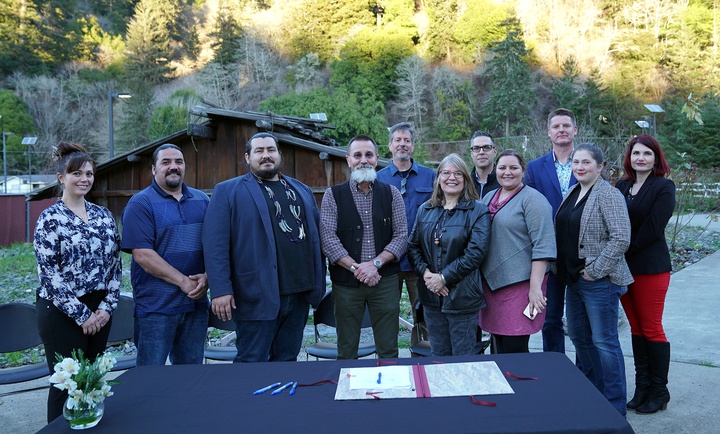 Representatives from the Yurok Tribe and California Department of Parks and Rec sign a landmark agreement on Feb. 12 for the Tribe to operate the Stone Lagoon Visitor Center. Photo courtesy of the Yurok Tribe.

The Yurok Tribe will begin operating the Stone Lagoon Visitor Center on June 1 after entering into a joint powers authority agreement with the California Department of Parks and Recreation.

From a Wednesday news release:

On June 1, 2020, the Yurok Tribe will officially begin operating the Stone Lagoon Visitor Center, following the completion of the first-ever Joint Powers Authority agreement between California Department of Parks and Recreation and a Tribal government.

“On behalf of the Yurok people, I would like to thank the California State Parks North Coast Redwoods District Superintendent, Victor Bjelajac for partnering with us on this historic project,” said Joseph L. James, the Chairman of the Yurok Tribe. “Our partnership with the park paves the path for tribal governments throughout California to form similar cooperative agreements with the state agency. We are extremely happy about this agreement and all of the positive opportunities it presents.”

“This is one of the most meaningful projects I have had the privilege to oversee during my many years with California State Parks,” said Victor Bjelajac, California State Parks North Coast Redwoods District Superintendent. “The Yurok Tribe is a great partner. We are very excited about the future of this project.”

“We are extremely proud to be the first tribein the state to form this type of agreement with the California Department of Parks and Recreation,” said Sherri Provolt, the Orick District Representative on the Yurok Tribal Council. “True partnerships are not just made, they are builtwith intention and purpose.The agreement is the result of a true partnership that will last for years to come. We are grateful and excited to begin developing shared programs and events for both our Yurok membership and the community as a whole.”

“This formal partnership between the park and the Yurok Tribe establishes a positive precedent for tribal governments across the state and is a wonderful example of mutual respect and trust,” said Assemblymember Jim Wood(D-Santa Rosa). “I look forward to seeing more collaborative agreements like this in the future.”

“This formal partnership between the park and the Yurok Tribe is a model for other tribal governments across the state. It will help educate visitors about the history of the land and the people who have long lived on this beautiful site. The collaboration helps not only to educate, but to heal, and I hope we see similar agreements in the future,” said Assemblymember James C. Ramos (D-Highland), who is the first California Indian to be elected to the California State Assembly.

The Joint Powers Authority agreement extends for a period of five years and affords the Tribe much latitude in terms of what it can do at the Humboldt Lagoons State Park facility, which is located in close proximity to a Yurok village site. The agreement creates an opportunity for the Tribe to hire interpreters to inform park visitors about the rich heritage of the Yurok people. The Tribe has exciting plans to enhance the way that locals and visitors experience this culturally and ecologically unique place.

For example, the Tribe will be putting on cultural sharing activities, such as canoe-making tutorials, basket-making classes and storytelling events at the visitor center. The agreement also establishes a process for the Tribe and the park to grant new concession contracts to tribal and non-tribal entrepreneurs. Access to the lagoon will remain the same.

Stone Lagoon, called Chah-pekw O’ Ket’oh in the Yurok language, plays a critical role in the Tribe’s traditional culture.In 2012, a group of Yurok ceremonial leaders restored a Jump Dance at Cha-pekw, which begins with a Boat Dance on Stone Lagoon and concludes on national park land within the Tribe’s ancestral territory.

The world renewal ceremony had not occurred at these sites since the 1800s when the United States outlawed the religious practice as part of coordinated campaign to colonize tribal lands and people. During this tumultuous time period, the California government was equally involved in the forced assimilation effort and committed acts of genocide against indigenous people in the state.

Last year, California Governor Gavin Newsom issued a formal apology for the state’s role in the genocide. He also made a commitment for his administration to participate in government-to-government consultations with Tribal leaders to discuss policies that affect Native American communities. The Stone Lagoon agreement is consistent with Governor Newsom’s order. The government-to-government accord also establishes a framework for tribes to better engage with the state on cooperative projects within tribal ancestral territories.

“The agreement is consistent with the substance and spirit of Governor Newsom’s order. The Yurok Tribe is proud to be at the forefront of this effort to improve how California —the state with the most federally recognized tribes in the US —engages with tribal governments,” concluded Chairman James.