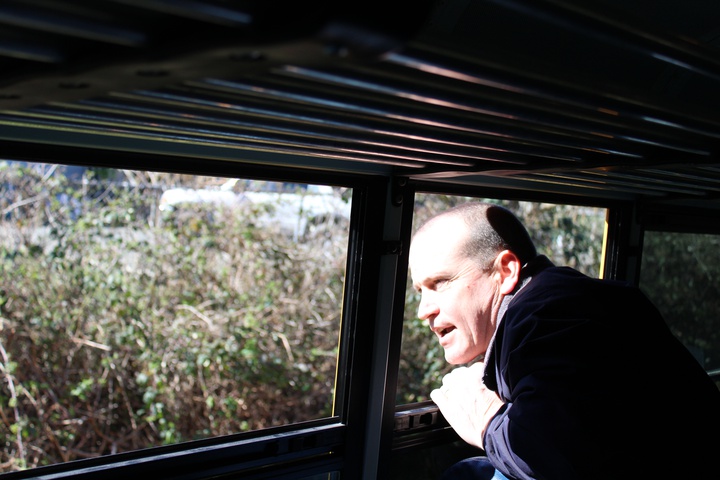 Paige Swan, principal at Crescent Elk Middle School, distributes work packets to students who have been forced to stay home since March 16 due to the COVID-19 pandemic. Photo: Jessica Cejnar

Though the Board of Trustees is expected to discuss the response to COVID-19 on Thursday, parents should plan for Del Norte schools to stay closed through next month at least.

Del Norte Unified School District Superintendent Jeff Harris said he expects trustees to revisit their March 16 decision to suspend school through the end of spring break on April 20. But, the superintendent said, that will likely be a short conversation.

“I don’t think there’s any will to open schools back up on Monday,” Harris told the Wild Rivers Outpost on Wednesday.

“Los Angeles Unified School District and other school districts have pushed their potential openings up to the first week in May and the governor has said publicly on a couple different occasions that if he were a family, he would continue to prepare as if schools were not going to resume prior to summer break.”

DNUSD will hold its regular board meeting Thursday via the Zoom video conferencing program as well as YouTube. Before the meeting, members of the public will receive a tutorial from the district’s director of IT on how to comment, DNUSD Director of Communications and Outreach Michael Hawkins said.

This will be the first time the district has streamed a meeting on line. Though the public could have a back-and-forth with trustees and officials previously, Thursday’s meeting will have a designated time for the community to comment, Harris said. He noted that the previous informal format for board meetings were not illegal, but were not a best practice under the Ralph M. Brown Act, California’s open meeting law.

Del Norte County and the rest of California are approaching the one-week mark of a stay-at-home order to prevent the spread of COVID-19. The virus has yet to officially show up in Del Norte, according to the county Public Health Branch. As of 8:07 a.m. Wednesday, 38 tests have been administered, 32 have returned negative and six are pending.

Though students can’t attend school, teachers, staff and administrators have made sure they’re receiving meals and work packets. This follows Governor Gavin Newsom’s March 13 executive order ensuring public schools are funded even as they’re forced to close and requiring them to continue to feed their students and make sure they’re still learning.

For high schoolers, those who are credit deficient are continuing to work with teachers to get back on track for graduation, Harris said. Instructors have also created weekly packets for their classes, ensuring students get “custom-tailored weekly work,” he said.

This week, DNUSD teachers are being trained to offer “blended learning,” a hybrid of paper-pencil and online-based instruction, Harris said. By April 6, he said, he anticipates most learning to be done digitally.

“But there will be a continuum of options,” he said. “A child may need to come and sit down with their teacher to discuss something on the computer at a school site. But, then again, a student may never darken the door of school until school resumes because they’re doing everything online from getting assignments to doing research to returning the work digitally to the teacher.”

As for state testing, Harris said, that has been suspended. He said there also won’t be adequate suspension data and even if there were, it wouldn’t be an accurate comparison since the school year is being cut short by about 60 days.

In addition to conducting Thursday’s Board of Trustees meeting via Zoom, teachers have been meeting with each other and will likely interact with students via the video conferencing platform. Paige Thompson, a fifth-grade teacher at Mary Peacock Elementary School and lead negotiator with the Del Norte Teachers Association, said she did a social and emotional check-in with her students using Zoom on Tuesday.

Google Classroom is also a format teachers have been using to provide work for their students,  Thompson said. She noted that next week teachers will be creating work packets, though they won’t be graded.

“It’s a learning curve for us with how much work to put in,” Thompson said. “Some things that are unique to my class go along with where we were when school closed. That is optional and students can go to Mary Peacock and pick (the packets) up.”

In addition to using Google Classroom and Zoom to interact with students, Marshall Jones, who teaches music, seventh and eighth grade at Smith River School, said the districts language arts program at the middle school levels offers online work along with a textbook.

Jones and his colleagues have been collaborating on “basic stuff everyone is going to do. Each teacher is also augmenting those work packets with lessons particular to their classes, Jones said.

Jones, who has been teaching for 27 years, said moving his class to a digital format is a challenge. An important aspect of learning is the face-to-face interaction and building relationships with his students. But, Jones said, he hopes that relationship will become closer when normalcy resumes.

“It makes you really appreciate what we have and, right now, what we don’t have,” he said. “Long term, I’m sure hoping we get back to school, but I don’t see it happening this year. I think it might even be a mistake if we did, but who knows.”

The DNUSD Board of Trustees will meet at 4:30 p.m. Thursday. Meetings will be streamed live via Zoom or on YouTube. For more information about school closures, click here.