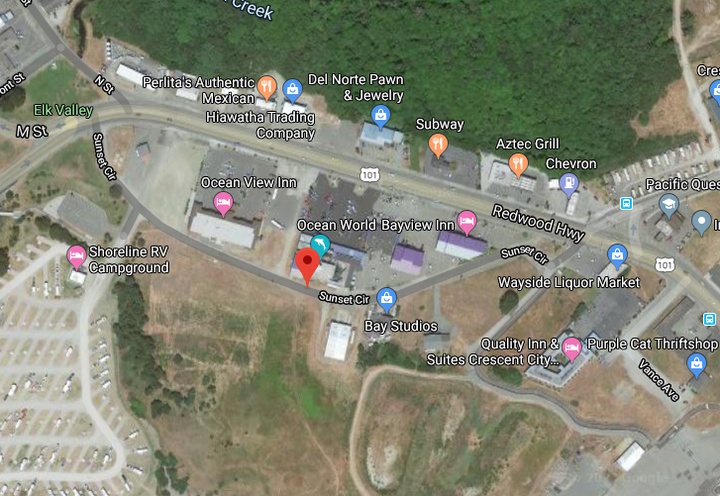 Though staff are still negotiating with a property owner in the area, Crescent City will begin designing a multi-use trail that will connect the harbor to the Elk Creek pedestrian bridge on U.S. 101.

The City Council on Monday awarded a $60,000 contract to Stover Engineering, which will complete specifications for a project that turns Sunset Circle into a one-way street and builds out a portion of the California Coastal Trail.

The project may also include fencing, additional streetlights and curbs, but that’s contingent upon reaching an agreement with the owner of two properties in the area, according to City Manager Eric Wier.

Wier said if the city can come to terms with the property owner in question, the design cost will be roughly $20,000. He estimated that the project would cost $60,000 if the city is unable to come to terms with the property owner and will have to be redesigned. There wouldn’t be enough room for a fence or for lighting the trail close to the curb, he said.

The Local Transportation Commission agreed to fund the $60,000 redesign if the city can’t come to an agreement with the property owner, Wier told the Council on Monday.

“We have everything in place to ensure we have a project,” he said.

According to Wier, the design must be started by Feb. 4 to meet a narrow timeline. The city must meet a March 16 deadline to be eligible for Caltrans construction allocation dollars.

According to the city’s staff report, in April 2018, the City Council approved an initial agreement with Stover Engineering to complete plans, specifications and the estimate for a trail project on Sunset Circle. Staff met with property owners many times and incorporated their ideas into the project, Wier told the Council on Monday.

In December 2018, The Council authorized a contract amendment with Stover Engineering to complete the extra work, according to the staff report. The redesigned project reduced the need to acquire the right of way by about 75 percent, but negotiations with the owner of two properties in the area have been unsuccessful, according to the report.

According to Wier, the project was part of a plan the city adopted in 2012 and was intended to be completed using $800,000 in Active Transportation Grant dollars.

On Monday, Crescent City Mayor Blake Inscore noted that he has seen the project since he served as a planning commissioner. He liked turning Sunset Circle into a one-way street accessible only to southbound traffic along U.S. 101, but he urged Wier to continue working with the one hold-out to ensure the pedestrian trail is lighted.

“To have a lighted street, a one-way street and a lighted walkway, all along behind those businesses, I can’t help but think it’s going to be a huge positive to the two hotels that are there,” Inscore said. “This is a win on every front for our community and it’s a project I firmly believe needs to be completed as it is; not a makeshift, take-away-the-lights. We need this project to be built as it’s envisioned and as it’s been designed.”

Wier said the city has spent about $150,000 in Active Transportation Program dollars so far. If it doesn’t complete the project, it may have to pay back those dollars and be on the hook to find other funding sources, he said.

“That’s a very real concern, which is why we hit it with this two-pronged approach,” he said. “At the very least we’ll build the trail, but the best case scenario is still to work with the property owner.”