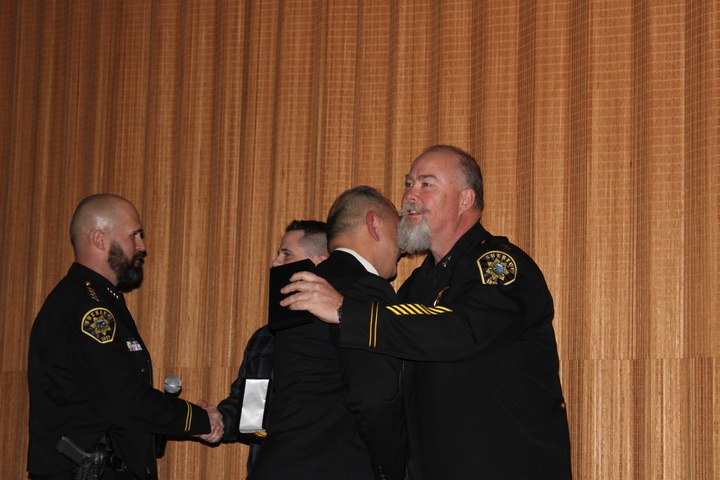 One person was tethered to the capsized boat, water inching toward his ears when Erik Apperson, Bill Steven and Grant Henderson arrived on scene. Another was unresponsive.

At an awards ceremony honoring his deputies, dispatchers, search and rescue volunteers, Explorers and other agencies his office works with Wednesday, the Del Norte County Sheriff told them about the morning of July 30, 2019.

When the call came in that a small fishing boat was in distress with three people on it, Apperson grabbed his favorite knife, alerted two of his most senior officers and deployed his office’s vessel. With dispatcher Elizabeth Edwards providing information, Cmdr. Henderson serving as incident commander, Cmdr. Steven at the helm and Apperson hanging off the prow, they found the distressed boat.

“The boat was upside down, taking on water and slowly sinking,” Apperson said. “One guy was tethered by a hook, another guy was non-responsive.”

Apperson threw Steven his knife — a cop-only Buck Auto Knife. Steven made short work of the tether, delivered the fishermen to an ambulance and all made a full recovery. But, Apperson said, his knife wasn’t the same.

“The Buck Knife got salty and could no longer open,” he said. “(Buck asked) ‘How did you screw up our knife?” 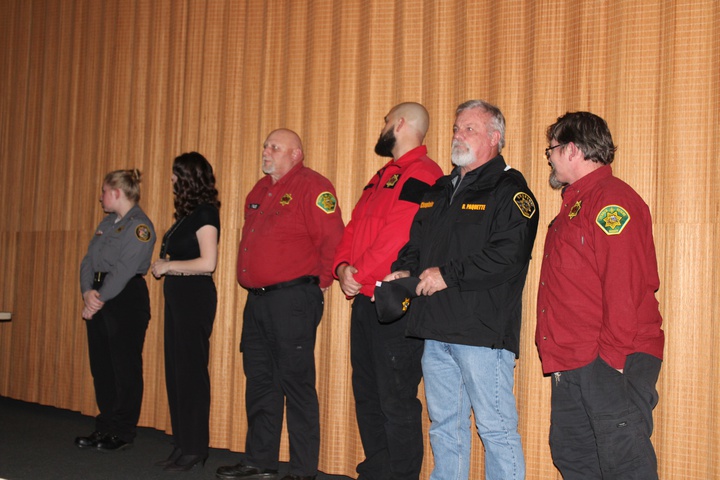 When Apperson told them the story, Buck, wanting to show their appreciation, sent him three brand new knives. Apperson gave them to Steven, Henderson and Edwards at Wednesday’s ceremony along with a life-saving medal.

Apperson noted that 2019 is the fifth year suicides outnumber line-of-duty deaths and urged those who work with him to seek help of a counselor and the chaplains available if they’re in trouble.

Before he began giving out awards, Apperson gave a by-the-numbers rundown of the Del Norte County Sheriff’s Office’s 2019. Deputies booked 916 felonies and 3,022 misdemeanors into the jail. His dispatchers fielded 14,500 911 calls and took 33,000 entries into the call log. According to Apperson, since dispatchers take roughly 10 phone calls for every entry in the call log, he estimated that in one year they answered the phone more than 330,000 times.

“I think these are numbers our community needs to hear,” he said. “I think our dispatchers need to be acknowledged.”

In addition to awarding service medals, Apperson recognized deputies, dispatchers and other partners who showed valor during a specific incident. One incident involved an encounter with “one of our own” who was in distress, he said. Apperson recognized Deputy Wade Owen and Sgt. Brian Donahue who were able to de-escalate the situation.

“The officer was demonstrating the criteria for 5150,” Apperson said. “I don’t know how the gentlemen didn’t use lethal force.” 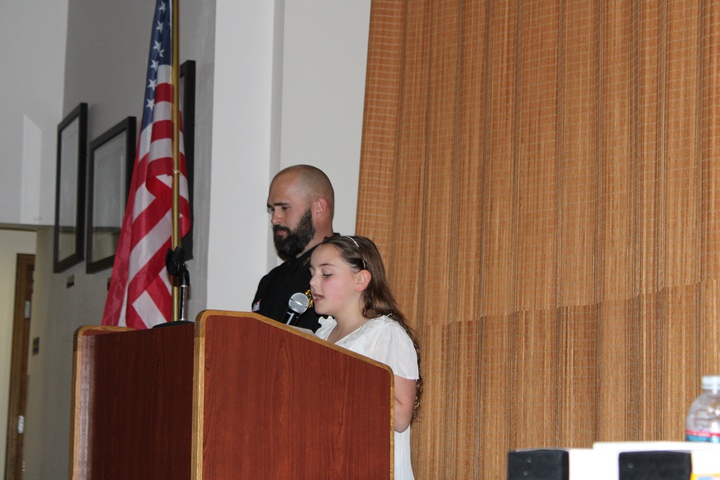 Helena Long, a long-time supporter of local law enforcement, talks about how important they are to her. Photo: Jessica Cejnar

Before he ended the night, Apperson also presented Steven, Officer Alex Pearson and California Highway Patrol Officer Jose Martinez with medals of valor. These medals stemmed from a collision involving Martinez and a semi truck in Klamath in 2017.

It was a rainy day when the call came over the scanner, Apperson recalled. Everyone rolled and, when they got there, Apperson said his deputies immediately began rendering first aid to Martinez.

“I vividly remember the scene,” the sheriff said, adding that Martinez’s patrol car was on fire when he arrived. “I thought there was no way somebody was alive within the vehicle.”

Apperson referred to Martinez, Steven and Pearson as three heroes and asked Martinez to pin the medal on his two peers.