K8 Students Will Be Back In Class Following Winter Break; Staff Concerned About Lack of Subs » 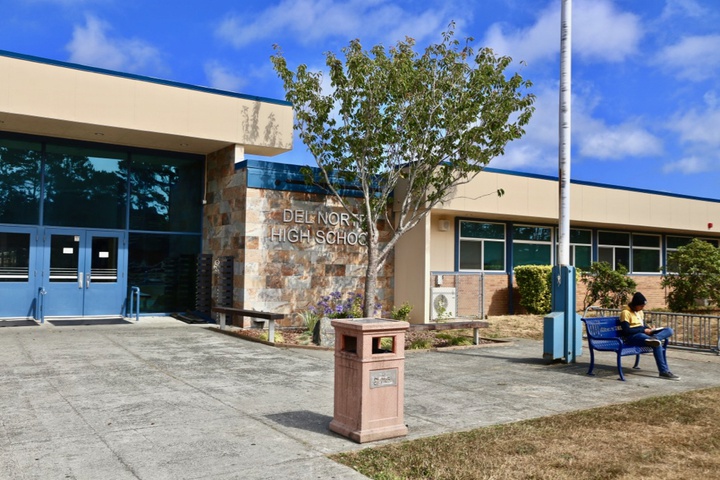 Before laying out potential plans for bringing more kids back to Del Norte High School, principal Alison Eckart shared a grim statistic with the Board of Trustees — the number of students receiving Ds and Fs increased by more than 50 percent over last year.

During the first six-week grading period for the 2020-21 school year, 60 percent of DNHS students received Ds and Fs, according to Eckart. She didn’t yet have the statistics for the second grading period, pointing out that it had just ended, but Eckart said they were bleak too.

“I care about Del Norte,” Eckart said Thursday. “I realize during the first six weeks we had a lot of tech difficulty. We didn’t have tech in the hands of our kids. We struggled… Students are just saying they’re tired. They want to see friends. They’re tired of the screen. It is not the same to having an in-person education.”

Wanting to allow for as much flexibility as possible, the Del Norte Unified School District Board of Trustees adopted a model that will allow students see their 1st-, 2nd- and 3rd-period instructors in-person twice a week for nine weeks starting in the second semester. During the subsequent nine-week period, students would be in their 4th-, 5th- and 6th-period classes twice a week.

According to Eckart, this would reduce in-person student contacts with instructors by half even though they would see every teacher twice a week. It would allow for more meaningful contact, deeper learning and more enrichment, she said.

The afternoon would be set aside for interventions, enrichment, career-technical education classes, performing arts and support for special education students. There would be no lunch period.

Eckart said she’d also like to keep a “fluid in and out” option in case a student is exposed to COVID-19 and needs to isolate. They will be able to continue their studies via Zoom, the Google Classroom or Canvas learning management platforms and can communicate with their teachers during their office hours.

After meeting with more than 150 people, including students, Eckart and her teachers created 13 drafts of plans to incorporating more in-person learning at the high school.

There was also concern about whether students will wear masks as well as constructing a schedule that takes into consideration older siblings who care for younger siblings, Eckart said.

DNUSD’s K-8 students returned to the classroom in a blended learning model incorporating both in-person and online instruction on Oct. 5. However, though DNHS allowed small cohorts to come back on campus for enrichment, electives and other supports, most students engaged in their classes via distance learning.

While some students are thriving in distance learning, Eckart said the increase in failing grades occurred during that portion of the school year. Noting that the plans for bringing more students back to campus were the product of several stakeholder meetings, including with students, Eckart said there was an idea about bringing in the struggling kids first followed by those who are more comfortable in distance learning.

She noted that there are classrooms at the high school that could be used for those who need internet access or more specialized enrichment.

“We could get more IAs (instructional assistants), more help,” Eckart told trustees. “We can have some of those rooms available. We can do more interventions at a deeper level. That is strategic, and then we can certainly, I don't want to say mandate, but we can mandate afternoon sessions for interventions, enrichments.”
Eckart also brought the idea up of incentivizing enrichment and interventions to help students get raise their grades.

During the School Board meeting, there was also discussion about COVID-19 transmission among adolescents and younger children.

According to DNUSD Superintendent Jeff Harris, there have been no person-to-person at Del Norte schools as of Thursday.
Earlier in Thursday’s meeting, Harris said children whose parents keep them at home because they may have been exposed to the novel coronavirus will not be marked absent. They will be able to enroll in the district’s independent study program and can still participate and complete the same work via Zoom.

“If we want our schools to stay open, we want the community to support us,” Harris said, adding that it’s important for people to wash their hands, wear a face covering and maintain a physican distance between others. “Your child will not be counted absent if you travel out of the area or have family come in and you keep your child home for two weeks to watch for COVID symptoms to make sure something didn't get brought home unbeknownst to you.”

In Del Norte County, five new COVID-19 cases were reported to the Public Health Branch on Thursday. There are 115 active cases in Del Norte and two people in the hospital currently, according to the county.

Going back to the concern about disciplining students who refuse to wear masks, Harris said the law allows a child who won’t wear a face covering to be removed from in-person learning. He noted that one student testing positive for COVID-19 could mean closing an entire cohort of their peers. That’s half the school that would be on distance learning for two weeks, Harris said.

“Even if we don’t have a huge number of kids who are positive for COVID, when you start doing contact tracing, then you (could) get to the point where you say, ‘We need to shut down the cohort,’” he said. “You’re telling 350-400 students, you can’t come back for two weeks.”

“I have two students at Crescent Elk (Middle School) they want to be there,” she said. “I’ve had no issues with them wearing masks.”

K. Moerke agreed with Corning, saying that while he understood the district’s worries, he feels they sometimes sell kids short.

“We have amazing kids,” he said. “We have done a great job of teaching our kids to be respectful to each other.”

Charlotte Svolos, a special education teacher at the high school, said she had concerns about the nine week block schedule that was proposed. She said it would be difficult working within a student’s individualized education plan if they haven’t seen them either in person or digitally for up to nine weeks.

Eckart pointed out that she didn’t like the nine-week block option that was presented at first. She said the afternoon could be devoted to making up for any learning loss students may have experienced at the beginning of the year. But, Eckart noted, that even if the perfect model were selected, the Ds and Fs might not magically disappear.

Eckart also noted that the high school has a policy that allows students to change classes within the first two weeks of a semester, a policy that could be implemented under the new learning model.

“We need to be very intentional and thoughtful and strategic about this,” she said.