Getting People Already In 'Survivor Mode' Through A Pandemic Isn't Easy; OES Prepares For Surge 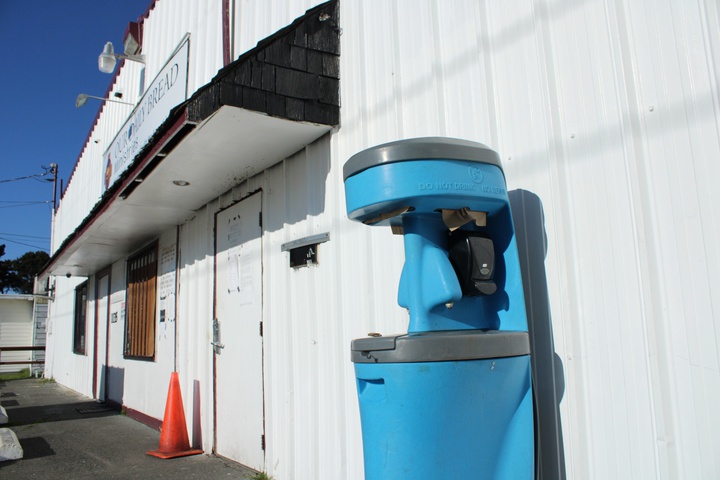 With help from the Social Services Branch, Our Daily Bread Ministries set up a hand-washing station that's been a hit amongst its clients. Photo: Jessica Cejnar

Most Del Norters are weathering the COVID-19 pandemic in their homes, but Daphne Lambert, Del Norte Mission Possible and Our Daily Bread Ministries are still helping those who don’t have shelter.

Our Daily Bread, at 1135 Harrold Street in Crescent City, is offering to-go meals three days a week and breakfast twice a week, Lambert told the Wild Rivers Outpost on Thursday. The organization, which also operates an emergency shelter during inclement weather, has also set up a hand-washing station courtesy of the Del Norte County Social Services Branch for those who are homeless and are referring people to other sources for emergency food.

Lambert said she has also created a flyer “specific to what the homeless need to know” on preventative measures, how long the virus lasts on plastic, metal and cardboard and the symptoms they should look out for.

The flyer also provides a heads up on what going to Open Door Clinic or Sutter Coast Hospital would look like if an individual feels he or she is sick as well as how to get their medication refilled without having to go into a health care facility, Lambert said.

But, she said, Our Daily Bread — and Del Norte Mission Possible because it operates under the same building — is in desperate need of donations.

“The donors have supported us for a very long time and that’s not happening right now,” Lambert said. “Everybody’s struggling to support themselves. That makes it to where paying the bills on our building is very challenging.”

Lambert founded Del Norte Mission Possible in June 2019 and held a meeting of the organization’s board of directors in November 2019. Her goal is to transform the Our Daily Bread building into a 24-7 rescue mission with 52 beds and case management services offering addiction and mental health treatment as well as medical care.

On Thursday, Lambert met with representatives of True North Organizing Network, the Community Food Council, the Yurok Tribe and other community organizations on Thursday.

With True North establishing a new group, Neighbors Helping Neighbors using $25,000 in California Endowment dollars, the goal is to figure out how to make sure those most vulnerable to serious infection due to COVID-19 get the help they need without having to put themselves at risk.

The faith-based community organizing network will use that money to hire three to five people to reach out to the at-risk populations in tribal areas, among the Latino community in Smith River and those in the Hmong Community, said Lead Organizer Kevin Malone. The organization is also working on establishing a hotline where people can register and design an in-take form that prioritizes those with the highest need, he said.

“We’re hoping to create volunteer roles for people who stay,” Malone said, adding that it could be as simple as offering emotional support to those who may need it. “We especially want to find and target young people both for paid positions, but also for volunteer roles. We know that younger folks are moving through this better than us old folks.”

A major topic of discussion among the group on Thursday, was the need to provide showers to those who don’t have ready access to one. Though Lambert told the Outpost that those she works with are already in survival mode and aren’t really concerned about COVID-19, they’ve been asking for showers.

United Methodist Church Pastor Dana Gill Port said she has been speaking with District 2 Supervisor Lori Cowan about having access to showers. Gill Port said they’ve also been communicating with Crescent City about the possibility of allowing people to use the showers at the Fred Endert Municipal Pool even though the pool itself is closed.

“The biggest concern is a lack of volunteers or workers,” Gill Port said. “If that’s something the Neighbors Helping Neighbors (group) could help staff, I think that would be a deal breaker. It would push them to be able to get showers.”

Gill Port also discussed the need for more hand-washing stations as well as portable toilets with Lambert, including how much they would potentially cost.

Though there’s already a portable toilet at Our Daily Bread, Lambert said it’s currently locked up because people were putting clothing in it and the organization couldn’t afford to keep fixing it. However, if the county was willing to put a portable toilet near the facility, they’d be willing to have it there, she said.

Lambert said she would also be willing to oversee any volunteers who could staff any shower facilities that are established in response to the COVID-19 emergency.

“Showers are a huge need,” she said. “Bathrooms are also. I’ve heard them say nobody lets them go to the bathrooms anymore. Port o’ potties are really important.”

Lambert also mentioned the need for donations for Our Daily Bread and Del Norte Mission Possible to the group Thursday.

“Our Daily Bread is the other piece in the community doing food recovery, just under a different language,” said Knowles, who is working under a CalRecycle Grant to divert food from Del Norte County’s waste stream.

Del Norte Emergency Services Director Jay Sarina confirmed Friday that the Office of Emergency Services is working with Crescent City to potentially use the swimming pool for showers. But it’s not a done deal, he told the Outpost.

Sarina said he requested mobile showers from the state on Friday, but he’s not sure if those are available and how quickly they may reach Del Norte County if they are.

“We’re trying to come up with a plan that can meet social distancing requirements and all of the precautions for people that would staff it,” he said.

Meanwhile, the Emergency Operations Center and the Public Health Branch continues to prepare for a surge in COVID-19 cases. Sarina said the county has entered into a memorandum of understanding with the Del Norte County Fairgrounds for use of their buildings. He said Public Health Officer, Dr. Warren Rehwaldt, has been working with Sutter Coast Hospital to prepare for the possibility of an overflow in cases, which includes identifying the fairgrounds as a potential resource.

“They do have one building and they do have cots and it’s set up right now,” Sarina told the Outpost. “We met with the hospital and there’s been a walk through. We’ll look at additional needs if that area is required for patients and getting that equipment as quickly as we can set up over there.”

At a community briefing before county and city officials, Sutter Coast Hospital CEO Mitch Hanna said the 49-bed facility could expand its capacity by an additional 20 beds.

In an emailed statement to the Wild Rivers Outpost on Friday, Hanna said Sutter Health is working with federal, state and local governments to prepare for a surge in COVID-19 cases.

“Our integrated network allows us to shift quickly so hardest-hit areas can receive the necessary resources, whether that’s personal protective equipment, ventilators, beds and so on,” Hanna said.

The Office of Emergency Services has also issued a request for proposals to local hotels to use their facilities to house those who are homeless as well as those who are sick, Sarina said. The state reached out to lodging facilities throughout California, but have only identified three in Del Norte, he said. OES focused on those three first and are going from there.

“It’s all in anticipation of a surge,” Sarina said, adding that Del Norte Emergency Services Manager Kymmie Scott has been working with officials in counties that are dealing with COVID-19 cases.

“We don’t try to reinvent the wheel. Overall (the community) needs to know we’ve been prepared to do a lot of things through the Office of Emergency Services. A lot of people are out there working tirelessly to try to make sure we have the best response we can and to try to keep people as safe as possible.”

Del Norte County had its first confirmed COVID-19 case on Thursday. The patient is a middle-aged man who is self-isolating at home, according to a Public Health Branch news release. Though local public health officials were investigating travel as a possible source of infection, Rehwaldt told Paul Critz on KFUG Community Radio Friday that travel may not have played a role in this first case.

Rehwaldt was unable to give Critz further information about the person recovering from the virus, citing patient confidentiality requirements.

A total of 89 tests for COVID-19 have been administered in Del Norte County as of 2:22 p.m. Friday, the Public Health Branch reported. The results for 13 cases are pending and 75 have are negative.