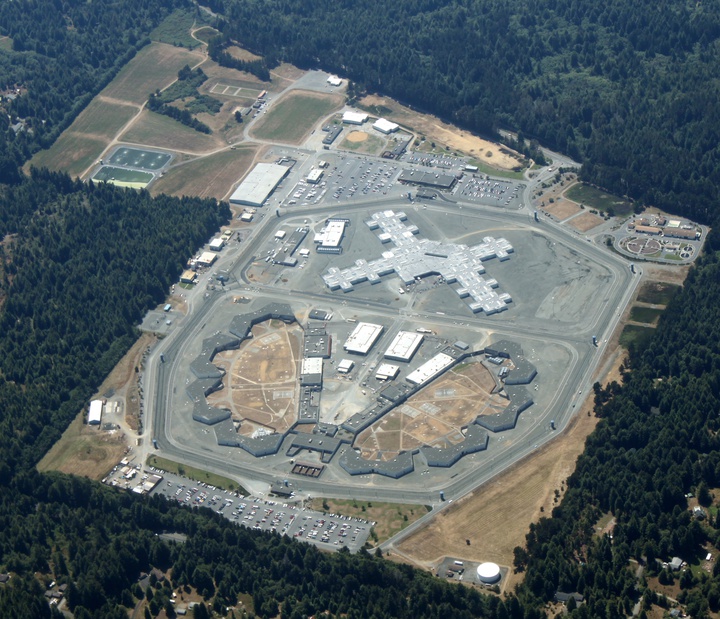 Concerned about the spread of COVID-19, the Del Norte Healthcare District tried to get a restraining order to stop an inmate transfer to Pelican Bay State Prison last month.

Healthcare District officials heard that a California Department of Corrections and Rehabilitation bus was headed to the prison on March 26, according to the district's chairman, Dr. Kevin Caldwell. He said his colleague on the Healthcare District Board, attorney Don Henion, filed the papers for a temporary restraining order or an injunction under the advice of Del Norte County Public Health Officer Dr. Warren Rehwaldt.

According to Caldwell, “one of the judges” told Henion that March 26 was a court holiday and he couldn’t grant the Healthcare District’s request.

“Then we know the bus did come,” Caldwell told the Wild Rivers Outpost and KFUG Community Radio’s Paul Critz on Monday. “But it left empty, which was supposed to be a good sign that the prison system really did shut down their prisoner transport system.”

Concerns about ongoing inmate transfers despite California Gov. Gavin Newsom’s March 19 shelter-in-place order reached the Del Norte Healthcare District from people who worked at the prison, Caldwell said. After hearing a transfer bus had visited the prison on March 23, the Healthcare District on March 24 voted to send a joint letter with Rehwaldt to the governor.

At that Healthcare District meeting, directors also asked Rehwaldt if he needed help, saying the district has money they can spend on the local COVID-19 response, Caldwell said. According to Caldwell, Rehwaldt asked for the Healthcare District to purchase oxygen concentrators.

“A concentrator is literally concentrating oxygen that’s in the air,” Caldwell said. “The reason (Rehwaldt) thought it was important that patients who have been recovering from COVID-19, they can usually get out of the hospital sooner if they had oxygen at home.”

The Healthcare District approved $25,000 for 25 oxygen concentrators as an emergency item at its March 24 meeting, Caldwell said.

The Healthcare District’s next big project is to help figure out how to open up the local economy in a safe manner, Caldwell said.

“We have all this information pouring in from all over the country, all over the world, but we have to somehow tailor it to our community,” he said. “And the big gorilla in the room is the prison.”

The California Department of Corrections and Rehabilitation tests its inmates according to guidelines set down by the U.S. Centers for Disease Control and Prevention, CDCR Press Secretary Dana Simas told the Outpost via email Monday.

Tests are ordered for all patients with influenza-like illnesses, which includes those as having a fever greater than 100 degrees Fahrenheit or a cough or labored breathing that’s unexplained, a guidance document on COVID-19 care from the California Correctional Health Care Service.

Those who are close contacts of confirmed cases are tested immediately for COVID-19 if they develop any symptoms of illness even mild symptoms or those not immediately associated with the novel coronavirus, according to the California Correctional Health Care Service.

Systemwide, 678 tests have been administered and 122 COVID-19 cases have been identified, according to CDCR’s webpage.

Amongst CDCR staff, a total of 89 have tested positive for COVID-19 as of 5:20 p.m. Sunday, according to the department’s CDCR/CCHS COVID-19 Employee Status webpage. Staff information is self-reported. Numbers for Pelican Bay State Prison staff weren’t available on that webpage.

On March 19, CDCR limited inmate transfers only to essential movement, Simas told the Outpost. This includes mandated court appearances, medical emergencies and mental health crisis bed transfers. On March 21, reception center inmates were to be quarantined for 14 days, according to Simas.

On March 24, Newsom issued an order suspending adult and Department of Juvenile Justice intake from counties for 30 days. The Board of Parole Hearings was required to develop a process for videoconferencing parole hearings. Newsom’s order also suspended in-person parole hearings for 60 days.

As of April 7, transfers from reception centers were suspended through April 22, according to Simas. And on April 24, inmates leaving CDCR custody for longer than one day to attend court hearings won’t be accepted back until intake has resumed.

“CDCR takes the health and safety of all those who live and work in our state prisons very seriously,” Simas wrote.

“We have successfully implemented an expedited transition to parole approximately 3,500 inmates to increase space within our institutions statewide, particularly in dorm settings. We continue to take additional precautions and actions as well, including suspending intake from county jails, verbal and temperature screening of all those entering state prisons, providing masks and hand sanitizer to staff and the incarcerated population and suspending in-person visiting and volunteering.”

Pelican Bay State Prison’s presence presents a unique challenge in Del Norte County, Caldwell said. He said he and the Healthcare District Board want to discuss this challenge at its next meeting on April 28.

“We’re so rural, so small, so distant from everything and yet we have this enormous prison in the middle of the community,” Caldwell said. “Which also means that we have hundreds of prison guards who are going in and out of the facility every day. I think that poses a real challenge to the community that most communities don’t have.”

The Del Norte Healthcare District, like others around the country, began as a hospital district in a poor rural county, Caldwell said. Using a chunk of the local property tax base, the district would operate a local rural hospital. When Sutter Health took over operating Del Norte County’s hospital, the Healthcare District’s purpose was to enhance local health care in the community, he said.

Currently its major project is maintaining the Del Norte Wellness Center, which houses Open Door Clinic as well as a dental clinic, a mobile dental program and a community garden. Caldwell said the Healthcare District is also contemplating building a clinic for visiting specialists.

The Del Norte Healthcare District is also a place where people can raise concerns about the community’s medical needs, Caldwell said.

“It can be a focus for community conversations about, ‘What do we do next?’” Caldwell said. “That’s the part about when we start opening up the economy, what does the community have to do to prepare.”

Caldwell, who operates Redwood Medical in Crescent City with his wife, Dr. Donna Sund, said though social distancing, suspending travel and vacation stays and other activities deemed non-essential is difficult, Californians as a whole are doing a great job.

Even though people are getting restless, the safety measures are working, Caldwell said. It’s important that people begin to discuss how to open things back up safely, he said.

“Start with congratulations,” he said. “You’ve all sacrificed a lot, but it’s working. So let’s not ruin that by opening up too fast.”

In a letter to the community Monday, Rehwaldt noted that he and other public health officials are legally-bound to enforce Newsom’s stay-at-home directive as long as it’s in effect. But the community can begin planning and “being innovative and creative,” to respond once Newsom gives the green light on reopening stores, restaurants and other facilities.

“We are all already tired of ‘shelter in place,’ including me,” he said. “I want to be able to go to a theater or my favorite restaurants, and I would love to be able to travel again. But since I know what this virus is capable of, I am more than happy to wait. We never, ever want to see how bad it could be …”