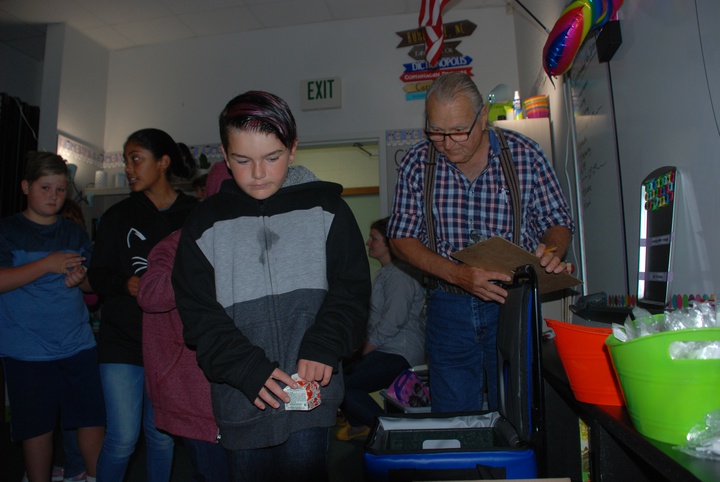 Though they started their day in the multi-purpose room like normal, Lara Hirt’s students at Mary Peacock Elementary School were in for something new on Monday.

The principal greeted her charges and sent them to their classrooms where they had breakfast — milk and juice, pluots from a farm near Chico and their choice of Frosted Flakes, Honey Nut Cheerios or Cocoa Puffs. Though it was the first time the entire school took part in the new Breakfast in the Classroom program, there were few hiccups.

Wanting to make sure spills were kept to a minimum, Lemrise said he made sure trash cans were centrally located and buckets were available outside every classroom to collect any milk or juice that was left over.

When fourth-grader Esteban Gonzalez brought the first bucket to Lemrise, the custodian showed him how to rinse it out so it would be clean for tomorrow.

“Here’s your first blue slip for the day,” Lemrise told Esteban.
Mary Peacock Elementary School’s Breakfast in the Classroom began with baby steps last year. According to Hirt, it started as a pilot program for Paige Thompson’s fifth-graders and Lisa Sedgwick’s first-graders.

Toward the end of the year, Del Norte Unified School District Nutrition Services Director Deborah Kravitz asked Hirt if the program could be deployed in four to six classrooms for the 2019-2020 school year. Instead, Hirt said, her teachers wanted to take it campus-wide.

Kravitz delivered additional packets for hot and cold foods Monday. Food service assistant Candra Bottorff arrived at 6 a.m. to put everything together and teachers sent a student or a volunteer grandparent to wheel breakfast to their classrooms.

“One of the goals I’ve had over the years is to implement breakfast in every classroom,” Kravitz said. “I’m really excited. Candra has been working hard for the last few days, really.”

After deploying the program for the first time last year, Hirt said her teachers reported a higher participation rate. Instead of asking when snack time was, youngsters were feeling full longer and the question went away, she said.

“Both classes noted increased family relations,” Hirt said. “There’s more of a family feel and a smooth transition to teaching. Neither teacher thought it impacted their instructional day.”

Hirt noted that last year the students who had their breakfast in the multi-purpose room were reluctant to head to class. They were busy visiting with friends, she said.

There were also logistics to iron out too, Hirt said. Teachers had requests based on things that worked and things that didn’t work in their classrooms, she said. For example, while Thompson’s fifth-graders were able to choose from three different kinds of cereal, kindergarten teacher Judy Smith felt that was too chaotic for her youngsters, Hirt said.

“Candra takes care of all that,” Hirt said. “She’s a genius.”

For now, Kravitz said, Breakfast in the Classroom will be an extension of that first pilot program at Mary Peacock. Teachers at Bess Maxwell Elementary School were interested in the program at the end of last year. But, Kravitz said, she wants to see how Mary Peacock responds to its school-wide Breakfast in the Classroom program before she determines if more campuses can participate.
Hirt pointed out that teachers at other schools want to see how it works somewhere else before they try it.

“They want to hear what systems are in place to support that,” she said.