« Revamped Wonder Bus Will Be On the Move Soon; City Council Recap for Sept. 3, 2019

Councilors Debate Who Should Be Responsible For Sidewalks, Curbs and Gutters in Crescent City 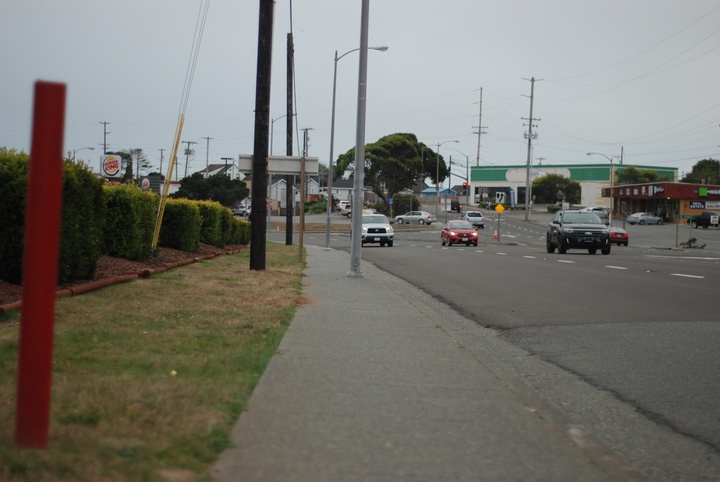 The Crescent City Council on Tuesday debated when project developers should be responsible for installing sidewalks, curbs and gutters. Photo: Jessica Cejnar

Staff’s desire to clarify an ordinance governing sidewalks, curbs and gutters led to a lengthy debate among the Crescent City Council.

Councilors on Tuesday discussed who should and shouldn’t be responsible for installing sidewalks, curbs and gutters as well as how city employees should make that determination. They agreed that property owners needing to remedy a code violation or remodeling a home without adding to its square-footage shouldn’t be on the hook for public improvements.

They also discussed the term “substantial improvement,” which is in the municipal code, and other potential triggers for public improvements. These include the cost of the project versus the appraised value of a potential development or the market value of an existing structure.

“There needs to be consistency between the municipal code and this specific ordinance that then becomes part of that code,” said Crescent City Mayor Blake Inscore. “It seems to me that we need to look at both of those things and make sure we’re bringing it into alignment.”

On Tuesday, staff proposed changing Ordinance 801 to require developers of a new dwelling or those moving an existing home or building to an unimproved lot to provide for the construction of curbs, gutters and sidewalks.

Staff proposed changing the ordinance to exempt projects from being responsible for public improvements if it’s an addition to an existing structure; is an accessory building; a detached garage; an accessory dwelling unit; and if the project is an alteration to a historic structure that wouldn’t result a change in its historic designation. Proposed changes also included exempting projects from public improvements if it doesn’t require a building permit or is a remedy to code violations.

According to Public Works Director Jon Olson, the previous ordinance required sidewalks when the project cost is equal to or exceeds 25 percent of the assessed property value.

In 2017, however, proposed changes to the ordinance included exempting projects that don’t increase “habitable floor area” from needing to install sidewalk improvements. It also limited the cost of improvements to 25 percent of the cost of the project.

“If I have a $100,000 project and sidewalk improvements are required, they’re maximized at 25 percent of the project cost; $25,000 in that case,” Olson told the Council on Tuesday.

However, though the Council in 2017 liked those ideas, it wasn’t quite what it had in mind, Olson said.

“The way the current municipal code reads, as staff interprets it now, what triggers sidewalks wasn’t super clear,” Olson said. “We took some time with legal counsel and came up with an interpretation of the code we feel we can justify. We’re hinging on a piece of code that says substantial improvements.”

Since the municipal code refers to substantial improvement, Olson said that it’s his interpretation that if a project is 50 percent of a building’s value, that should be a trigger that the developer is responsible for 25 percent of the cost of sidewalk improvements.

“I don’t have a problem enforcing it this way, but in review of the meeting minutes it doesn’t meet the Council’s intent on what would or what would not trigger sidewalk improvements,” Olson said. “So we’re seeking direction to either modify the triggers in the code to take away that substantial improvement trigger and go to some other type of triggering event. We’ve suggested a few items in the staff report of ways you could say, ‘Well this is what triggers it (and) this isn’t what triggers it.’”

Under staff’s understanding, the Council’s desire was to only require the installation of curbs, gutters and sidewalks in the case of new building construction, according to Tuesday’s staff report.

Additions to existing buildings or adding accessory units wouldn’t trigger sidewalk requirements regardless of the project cost, according to the report.

On Tuesday, Olson said he’s trying to differentiate between construction and new construction since the municipal code refers to both.

Councilor Jason Greenough said he thought the reason he and his colleagues changed Ordinance 801 was to give people an incentive to “keep their homes up.” If the city wants to create a standard, he said, it needs to be willing to take on some of that burden. “There was a proposal that was brought up when we were having this discussion to have the city actually do the work,” Greenough said.

“The property owner would pay for the materials… and city staff would do the project and put those sidewalks and gutters in because our staff’s very competent at that.”

Greenough said he remembers watching Rumiano Cheese Co. laying down sidewalk only to have to rip them up repeatedly because “they couldn't get it right.”

“Tell me where I’m going to get a market value for an 8,000 square foot commercial building,” she said.

Responding to Greenough’s question about having the city provide staff to do the sidewalk improvements, Inscore said “that just doesn’t work.” Staff doesn’t have the time, he said.

Inscore, who voted against Ordinance 801 when it was initially proposed in 2017, said thresholds for improvements shouldn’t apply to residential remodels at all.

At the end of the discussion, Wier said an amended ordinance would be brought to the Council that would require sidewalk improvements for commercial remodels based on the increase in floorspace it would entail. Projects that are less than 50 percent of the last assessed value of the building would be exempt from the requirement, Wier said.

Wier said if a proposed residential remodel includes adding to the structure and if it exceeds 50 percent of the market value, the amended ordinance could read to have the sidewalk improvements be required.

When Greenough asked if city staff could bring back the idea that the city would take on some of the burden for installing those improvements, Wier said it could be a separate discussion.

“It would be our liability,” he said. “We can take it on as a separate discussion if you want that to be an option for people.”