California at Odds Over Whether to Make Insurers Cover Infertility Treatments » 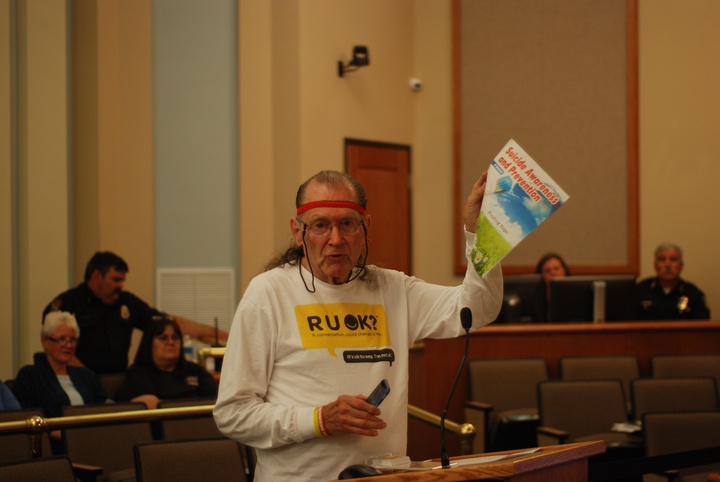 Gordon Clay is familiar to many elected officials in Del Norte County, yet the problem he’s drawing awareness to isn’t getting better. In fact, he says, in nearby Curry County where he lives, it’s getting worse.

Clay has drawn attention to the prevalence of suicide for the past roughly 30 years. Having considered ending his own life at one time, Clay said, he started one of the world’s largest websites devoted to suicide prevention in 1996.

Since he moved to Oregon in 2001, Clay has advocated against alcohol abuse among high school seniors and bullying prevention in addition to suicide awareness.

Each year, before receiving those proclamations, Clay encourages people to ask their loved ones, neighbors and colleagues, “are you OK?”

“Let them know it’s OK to say, ‘I’m not OK,’” he said at the Board of Supervisors’ Aug. 27 meeting. “That conversation can change their life and it might change yours too.”

Clay’s most recent campaign, which the name of his latest website, ZeroAttempts.org, sums up, focuses on reducing the number of people who try to commit suicide. In the U.S., about 1.4 million people try to kill themselves annually. About 47,000 succeed, Clay told the Wild Rivers Outpost on Friday.

According to the American Foundation for Suicide Prevention, adult women reported a suicide attempt 1.4 times as often as adult men.
Curry County has the highest number of suicides per capita out of Oregon’s 36 counties, Clay said. In the last 30 years, he said, he doesn’t see a chance of turning things around because of the increase in anxiety around housing and finding an equitable job.

Clay’s message still resonates with those who need it, though. This distributing cards making the Crisis Text Line 741741 known. He’s distributed more than 20,000 semi-colon buttons in Curry and Del Norte County. Most recently, Clay has also been distributing PopSockets advertising the 741741 Crisis Text Line.

“We haven’t had a kid, since 2012, kill themselves,” he said. “We have had a lot of attempts, but not any successful suicides, which I think is an incredible thing.”

In addition to the Crisis Text Line, there are resources for youth who may be experiencing a mental health crisis. Terrin Musbach, a climate coach with Del Norte Unified School District, said the school district offers youth mental health first aid training for those who are 18-years-old or older.

“It’s a first responder intervention for youth experiencing a mental health crisis or a mental health problem,” she said, comparing it to a certification for physical first aid.

“It’s essentially a set of speaking and listening skills to use when people are showing distress,” she said. “Unlike physical first-aid, the acronym doesn’t have to be applied in order. ALGEE can be used at any time during intervention, supporting people experiencing unhealthy mental health.”

As of last week, Musbach said, 120 people in Del Norte County are trained Mental Health First Aid providers. This comes as the California Legislature passes a law saying 10 percent of all school district staff statewide must be trained in providing mental health intervention in the next year or two, she said.

“By the time this legislation passed, DNUSD already had 10 percent trained with intervention,” she said. “We’ve been partnering with local organizations that want to be trained. All of the trainings are open to district staff.”

County employees are also able to take part in the Mental Health First Aid training, Musbach said. The training is provided through the National Council on Behavioral Health, she said.

Meanwhile other local organizations offering mental health support for youth include Coastal Connections, which has programs for minority groups including LGBTQ. Another group, Resilient Del Norte, was also formed about two years ago with the goal of reducing the impact Adverse Childhood Experiences have on local youth, Musbach said.

“It’s an entire network of people reaching out,” she said.

Clay encourages training through the QPR Institute, which focuses on suicide prevention.

Safe Talk is another source to receive training on how to offer support to someone who may be considering suicide, he said.
More information on Suicide Awareness Prevention Month will be printed in the Saturday issue of the Del Norte Triplicate, Clay said.

“I want to get them motivated to do something,” he said.