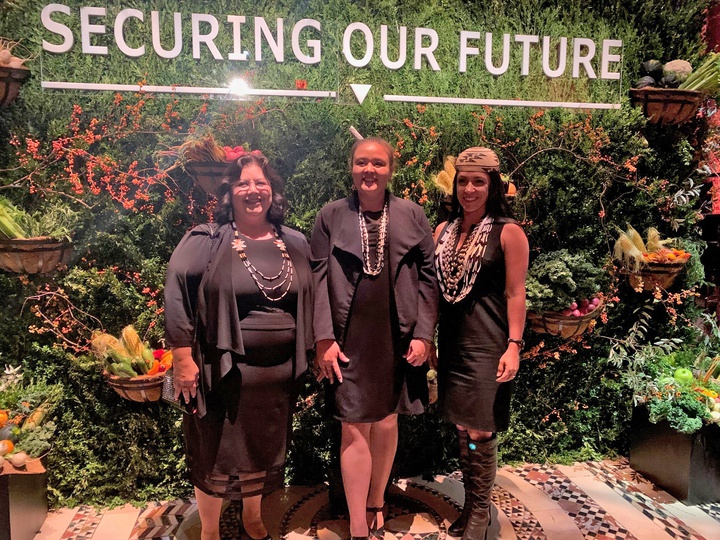 Tonight, the Yurok Tribe will be one of the first two indigenous nations in the United States to receive the United Nations Development Programme’s prestigious Equator Prize.

The award is an acknowledgement of the Tribe’s forward-looking, climate change mitigation work, which merges Traditional Ecological Knowledge with western science to facilitate the restoration of healthy forests. Rehabilitating biologically diverse woodland habitats is critical to resolving the climate crisis.

On the eve of the United Nations 74th General Assembly, Yurok Tribal Councilmembers Lana McCovey and Mindy Natt will be representing the Tribe at the Equator Prize Award Ceremony, which is happening at the iconic Town Hall Theater in New York City. A short film highlighting the Tribe’s cutting-edge forest stewardship practices will be shown to the numerous, high-ranking government officials, international media outlets and celebrities in attendance at the illustrious event.

“We are incredibly honored to accept the Equator Prize on behalf of the Yurok people,” said Yurok Tribal Councilmember Lana McCovey. “Similar to Tribal nations all over the globe, our culture, quality of life, and economy require intact forests to flourish.”

“The Yurok Tribe is proof positive that it is possible to live in harmony with the environment in the 21st century,” added Councilmember Mindy Natt, who will be attending the UN’s 74th General Assembly. “As we restore biodiversity to our forests, we are creating a landscape and a community that is resilient to climate change.”

The Equator Prize, created by the UNDP’s Equator Initiative, aims to acknowledge efforts to reduce poverty through environmentally sound projects. The award ceremony begins at 8pm EST. This year’s 22 winners were selected from a pool of 847 nominations across 127 countries. In addition to the recognition on the world stage, each recipient will receive $10,000.

Residing along the Klamath River in far Northern California, the Yurok Tribe is the most populous Native American nation in the state. For millennia, the Yurok people enjoyed an affluent and comfortable existence, which was anchored by the Klamath’s bountiful salmon runs, the abundant game and edible plants in the expansive prairies adjacent to the river and prolific quantities seafood from the nearby ocean. The richness of the region afforded the Tribe ample time to develop a complex system of governance, a thriving economy and timeless artwork. More than 50 Yurok villages had access to the same immense wealth until the California Gold Rush and ensuing genocide, which resulted in a 95 percent reduction in the tribal population and caused significant damage to the natural environment in the Tribe’s ancestral territory. However, the Yurok people persevered to overcome incredible obstacles to arrive at a positive place in the present.

Currently, the Tribe is in the middle of the most substantial growth period in modern times. For example, the tribal government and Tribe-affiliated workforce recently swelled to more than 400 individuals, most of whom are Yurok citizens. A large majority of the staff are involved in the types of natural resources enhancement projects that elicited the commendation from the Equator Initiative.

The Tribe was one of the first participants in California’s cap and trade program and has dedicated a signification swath to forest for carbon sequestration. With proceeds from the program, the Tribal Council started recovering the Tribe’s 500,000-acre former territory. This summer, the Tribe celebrated the reacquisition
of approximately 60,000 acres of forest. The Yurok Forestry, Fisheries and Watershed Restoration Departments are working to turn much of the newly acquired land into a salmon sanctuary and an old-growth for ecosystem. This project will also improve wildlife populations as well as the availability of crucial cultural resources, such as traditional basket-weaving materials and plant-based foods. Revenue generated from the program also enabled the Tribe to recover approximately 2,000 regalia items. The ceremonial items are used in the Tribe’s ceremonies, which aim to bring balance to the world.

The Yurok Tribe is the largest Tribe in California with more than 6,000 members. The Tribe’s ancestral territory comprises 7.5 percent of the California coastline and is home to the Klamath River, the lifeline of the Yurok people. The Tribe’s major initiatives include: condor reintroduction, dam removal, ecological restoration, fisheries management, natural resources management, sustainable economic development and land acquisition.

For more information about the Equator Prize, please visit: https://www.equatorinitiative.org/