The Christie R's Time May Be Nigh; Harbor District Discusses $60k Proposal to Demolish Rusty Boat 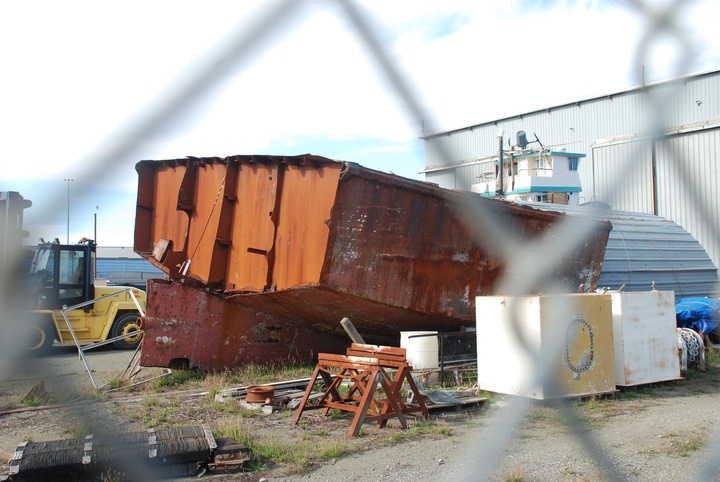 Ted Long’s days of dealing with the Christie R may be numbered.

More than six years after he assumed liability of the rusted-out boat, Long, owner of Fashion Blacksmith, went before the Crescent City Harbor District on Tuesday with a proposal to demolish and recycle the vessel.

Long, who said the boat has cost him more than $100,000 in lost income and damaged vessel carriages, offered to perform the demolition for $60,585. His proposal was roughly $10,000 less than a $70,535 bid the Harbor District received from Global Diving and Salvaging for the job.

Long spoke to harbor commissioners during a discussion Tuesday regarding Global Diving and Salvaging's proposal to demolish the Christie R. But because Long's proposal wasn't included on the agenda, commissioners tabled the issue to its Oct. 1 meeting.

“That is income that will come back to the Harbor District,” Long told commissioners. “I will be paying you rent on that work to remove that boat.”

Since the vessel contains concrete and polyurethane foam, rather than use an acetylene torch, shears are required to demolish it, said harbor facilities manager, Mike Baker. Baker said he reached out to several salvage companies to seek bids for the demolition, but was unsuccessful. Global Diving and Salvaging was the only one to respond, he said.

After the harbor district received Global Diving and Salvaging’s proposal, Long submitted his proposal to demolish the Christie R. According to Harbormaster Charlie Helms, that proposal came to the harbor too late to be included on Tuesday’s agenda.

“We’ve been looking at removing the Christie R for quite awhile,” Helms said. “We’ve gotten a bid from a reputable organization that’s got a track record that would have done it right. We shared the information with Mr. Long. He came back with a proposal that would be helpful for the harbor and can work for him.”

The Christie R was part of a vessel buy-back program that granted fishermen “a certain amount of money” to relinquish their permits, Long said. She sat in the harbor’s boat basin for several years, was one of the casualties of the March 2011 tsunami and had been tied up outside the harbor’s breakwater until it broke its moorings and washed ashore and was grounded, Long said.

“A quick patch would not fit, it was severely deteriorated,” Long said. “I assumed liability of that boat when I hauled it.”

Long said he met with the Crescent City Harbor District in December 2014 to discuss the fate of the Christie R. At that time, he said, Global Diving and Salvaging submitted a $300,000 proposal to remove the boat.

Long said he removed about 75-80 percent of the vessel that wasn’t full of concrete or polyurethane foam. That cost the Crescent City Harbor District about $39,000, he said. Because of the toxic gases associated with the foam, however, Long said he was worried about a potential fire hazard.

“We had our share of boat fires over the years and I am the sole single person responsible for all the lives over there,” he said.

Long said the weight of the vessel also damaged his boat carriages. Though he spent about $25,000 to rebuild the carriages, he said he chose not to seek reimbursement from the Crescent City Harbor District because he knew it was going through hard financial times.

“That section of boat has been sitting there for years and years. I know the harbor didn’t have the money to get rid of it,” he said. “It’s been an inconvenience. It’s cost us over $100,000 in immediate lost income and the destruction of the carriages.”

At this point, Long said, he and his staff have become accustomed to the Christie R’s presence, but for the first time in six years he’s in a position to cut it up and get it out of his facility.

“To be honest, I don’t care if the Christie R sits there in perpetuity. I would rather see money go to dredging and to other things,” Long said.

Much of the cost to demolish and remove the Christie R will be spent on transporting the vessel to waste sites, he said.

In other matters, Harbor Commissioner Carol White, who owns Port o’ Pints with her husband Rick, said she overheard boaters talk about using the harbor’s boat launch without paying the $6 fee.

“The honor system is dead,” she said. “I watch people go into the parks and they just pull the tab and they do nothing else. To me, it’s a shame, but we’re losing revenue. Every $6 adds up over time.”

Helms estimated the harbor loses about $7,500 to $9,000 a year from people not paying the boat launch fee. He said he hopes to bring a proposal before the Harbor District Board of Commissioners in October to look into just how much the port is losing as a result.