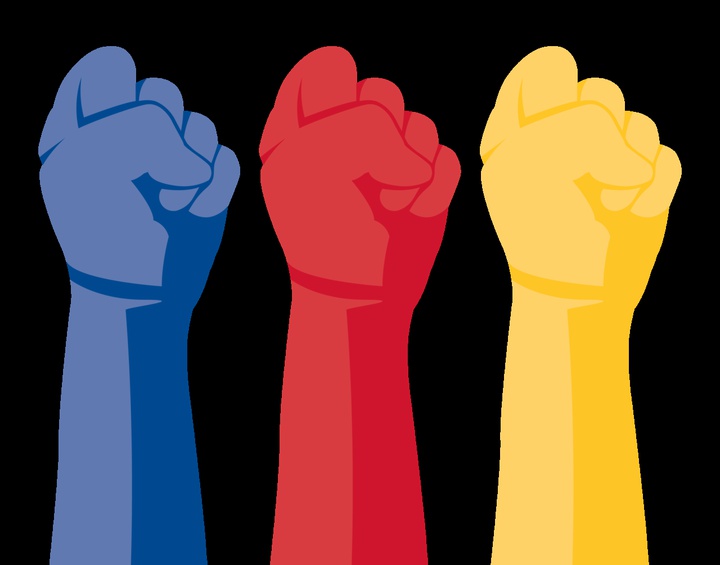 Negotiations tactics between a grocery workers’ union and the supermarket chain Fred Meyer are ramping up after 15 months of stagnant communication.

United Food and Commercial Workers Local 555 announced yesterday that it canceled contract extensions with all Fred Meyers in Oregon and Southwest Washington at the end of August — including the store in Brookings — due to unfair labor practices.

While this cancelation doesn’t currently affect any union worker’s hours or benefits, union Communications Directory Kelley McAllister told the Outpost that it does eliminate contractual rules that prevent the union from taking specific actions against the company — like striking.

“A strike is our last resort,” McAllister said.

In response to the escalating tensions with the union, the retailer has posted job fliers at store locations offering non-union “replacement” workers wages of $15 an hour — an action the union president called “detestable.” 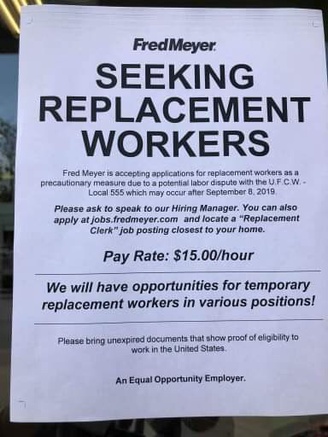 “Fred Meyer chose to intimidate, threaten, and demean their employees (many of whom have given this company their life’s work) by misrepresenting Union intentions and attempting to coerce workers into taking drastic measures,” UFCW Local 555 stated in a press release. “In addition, Fred Meyer immediately began 'SEEKING REPLACEMENT WORKERS' at a pay rate of $15 an hour, more than many current employees make, and significantly more than the employer has offered in bargaining.”

While McAllister was unable to share any future negotiation strategies, she said more information will be made public within the coming weeks.

“On September 22, we will be able to tell everybody our next plan of action,” she said. “Another thing thing that could happen between now and then is that we could end up in negotiations again. Our goal is to get the best contract for our members so we can all be done with this.”

Read more in the UFCW Local 555 press release below:

Tigard, Ore – Following fifteen months of tense negotiations in which the employers’ continually refused to provide reasonable proposals, United Food and Commercial Workers (UFCW) Local 555 had, at the end of August, cancelled contract extensions for CCK departments across Oregon and SW Washington.

In response, Fred Meyer chose to intimidate, threaten, and demean their employees (many of whom have given this company their life’s work) by misrepresenting Union intentions and attempting to coerce workers into taking drastic measures.

In addition, Fred Meyer immediately began “SEEKING REPLACEMENT WORKERS” at a pay rate of $15 an hour, more than many current employees make, and significantly more than the employer has offered in bargaining.

The Union recognizes that these flyers were designed to spread fear and to pressure workers into making impulsive decisions. The Union denounces these intimidation tactics in no uncertain terms (President Dan Clay calls them “detestable,”) including the widespread one-on-one “captive audience” meetings that Fred Meyer’s CCK employees were recently subjected to.

To reiterate, the entirety of these actions took place in spite of the fact that the Union has stated in no uncertain terms that a strike would not be called as part of this announcement. The Union has consistently promised to give any such notice to workers first, should a future strike be called.

Such employer actions, taken together, amount to what are known as ULPs (unfair labor practices). The Union promptly initiated action to seek immediate relief and remedies by filing formal complaints with the National Labor Relations Board.

Due to Fred Meyer’s member intimidation, corporate overreaching, and unfair labor practices, the Union has determined that it is now necessary to cancel all remaining contracts for Kroger companies (including Fred Meyer and QFC).

To date we are unaware of Safeway or Albertsons perpetrating similar ULPs. There are certain Safeway/Albertsons’ stores that share a contract with a Kroger store; those stores will therefore experience a related contract cancellation, but with no intent on the Union’s part to take action against Safeway or Albertsons in response to Fred Meyer’s ULPs.

It is important to note that no worker is put in jeopardy during a contract cancellation or expiration. The law requires employers to maintain the status quo for their employees, including all terms and conditions of employment, regardless of the contract status. In other words, member pay and benefits will not change as a result of these cancellations/expirations. Union protections for our workers also remain in effect.

Further information on Union actions and requests for public support will be forthcoming on September 22nd after the remaining cancellations take effect.

UFCW Local 555’s Unity Negotiation Team has consistently made two demands of the employer:
1) Provide wages that allow workers to live and shop in the communities they serve;
2) Address the gender equity gap between Schedules A and B as identified by the Union in May as part of the Women of 555 campaign.

Fred Meyer stores, owned by the Kroger corporation, have refused so far to make a meaningful move to close the average $3.53 gap between Schedule A and Schedule B that was published by the union in May and reaffirmed by Olympic Analytics in August. Female workers at Fred Meyer stores are twice as likely to be funneled into lower-paying departments known collectively as “Schedule B” while men are twice as likely to be funneled into higher paying departments. Both studies find that the average woman would lose nearly a third of a million dollars over the course of a career. Employers proposals thus far would close this gap at the rate of a dime per year. UFCW Local 555 maintains that wage equity cannot wait 35 years and continues to seek a much more substantial remedy to wage inequity for grocery workers.

“We recognize that Fred Meyer must make a profit in order to operate successfully, but it simply cannot continue to be done at the detriment of their employees…and definitely not by paying women less. Profits derived from blatant inequity run counter to everything we stand for,” said Dan Clay, UFCW Local 555 President. “It is not okay for the men who run Fred Meyer to make more by paying women less.”

Concerned community members who have not yet weighed in to support workers are encouraged to sign the following petition: http://b.link/standwithus

United Food and Commercial Workers Union Local 555 represents nearly 25,000 workers in Oregon and SW Washington and has grown to be the largest private sector labor union in Oregon. Local 555 members are a diverse group of workers in retail, manufacturing, and healthcare, among other industries.