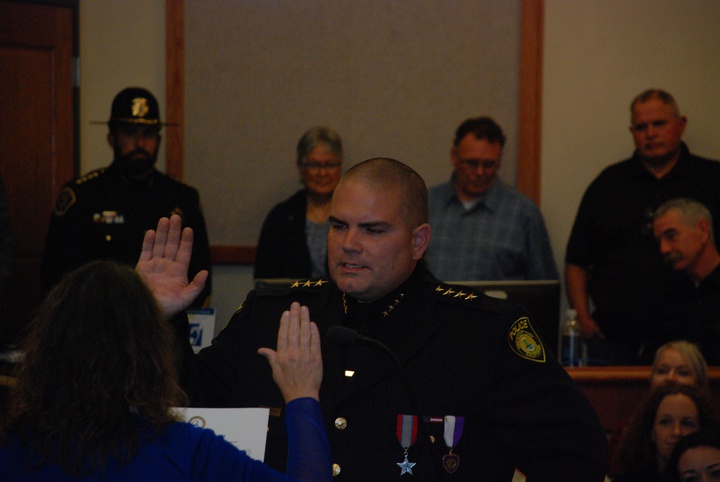 “It’s not me, it’s going to be we,” were Richard Griffin’s first words as Crescent City’s new police chief.

Speaking to his current and former colleagues, elected officials, city staff and residents on Monday, Griffin told his officers and the community to hold him accountable. His wife Caitlyn pinned the chief’s badge on his lapel with his son Carson and daughter Rogue looking on.

“Thank you for taking this leap of faith in me to give me the opportunity to serve. I’m not going to take it lightly at all,” Griffin told the Crescent City Council. “I’m looking forward to very good things in the future for this department.”

Griffin has been with the Crescent City Police Department since January 2019 after serving for about 14 years in the Del Norte County Sheriff’s Office. He takes over the police chief position from Ivan Minsal who retired after four years with the city in September.

Born and raised in Medford, Griffin has a Bachelor’s degree in business administration with a minor in criminology from Southern Oregon University. He has also received several awards including the Del Norte Sheriff’s Office Life Saving Commendation Award; the Del Norte Sheriff’s Office Deputy of the Year; the Community Action Prevention Alliance Recognition Award; the Special Unit Award; the Award of Heroism; the Purple Heart Award; and the Silver Star Award, according to an Oct. 14 press release from the city.

Crescent City searched for a police chief, recruiting with every POST agency in California and received 37 applications, said City Manager Eric Wier. The community even received job applications from as far away as the East Coast, he told the City Council on Monday.

When the city narrowed the list of candidates down to six, they were interviewed by a panel of community members including local law enforcement experts, representatives from the Del Norte County District Attorney’s Office, Del Norte Unified School District, residents and businesses.

After each member of the City Council gave their congratulations to their new police chief, Mayor Blake Inscore took Griffin’s request to hold him accountable seriously.

“Like you I try to be a straight shooter,” Inscore said, noting the law enforcement representatives and other friends and family who came to see Griffin take on his new role. “Prove to the rest of us what these people already know, and if you do that every day, you’re going to do a darn good job and this city will be proud to have you as its next police chief.”