« Deputies Arrest Man Who Had Been Evading Law Enforcement

Though transportation is a barrier for residents trying to feed their families, solving food scarcity in Klamath is more complex than establishing a market in the community, a panel of local native peoples said Thursday.

Strengthening the ties between the youth and their culture, particularly traditional means of obtaining food, is key to addressing Klamath’s status as a food desert, they said.

Sustainability also has to be part of the conversation. Klamath is unique, the panelists pointed out, and what works elsewhere may not work there.

“There’s been a ton of feasibility studies done and we’ve answered a ton of surveys and questionnaires, but I really think it comes down (to) what do we want, what do we envision, what’s going to sustain us,” said Georgiana Gensaw, a Yurok tribal member who lives in Klamath Glen. “If we got shut off tomorrow, how could we stay here? “

Part of the discussion compared Klamath with Hoopa and whether a market similar to the one the Hoopa Valley Tribe opened earlier this year would work. Saulsbury, who worked with the Hoopa Valley Tribe when its Ray’s Food Place closed in 2016, said it took about two years to open a new market. That’s a quick turnaround in the world of grocery stores, she said.

It also helped that Hoopa residents had come to depend on a grocery store, Saulsbury said. The sudden loss of Ray’s left a huge gap, she said, that residents pointed out needed to be filled.
Saulsbury also pointed out that the tribe was involved in designing its market from the beginning.

“(We asked) what does this community need?” Saulsbury said. “Are we going to allow people to sell the fish that they caught? Are they going to bring game in for processing? Going through all those pieces takes a lot of drive.” 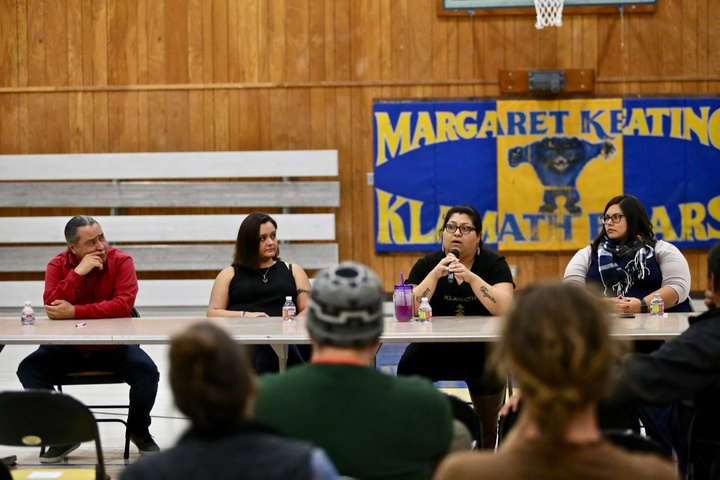 Unlike Klamath, Gensaw, who lived in Pecwan, said, Hoopa serves as a hub for residents in Pecwan, Weitchpec, Orleans and Soames Bar. It houses a high school, gas station, post office and bank. And to get to Eureka from those communities, she said, you have to drive through Hoopa, she said.

People typically pass through Klamath on U.S. 101 going north or south, Gensaw said. Rather than a market, sharing with others and teaching youngsters what’s edible and what isn’t would probably work better for Klamath in the long run, she said.

“While I think a grocery store is always a pie-in-the-sky vision, I myself would think, ‘We got to think about what is sustainable,’” said Georgiana Gensaw, a Yurok tribal member who lives with her family in Klamath Glen. “When the tourists are gone, it’s going to be you and I and Requa Hill and Hunter Creek and Arbor Glen and all these little communities that are going to have to sustain that store. So, what does that look like for us?”

Gensaw said it’s often difficult for those who rely on nutrition assistance through the USDA commodities program to be able to take advantage of those benefits. That program distributes food in Klamath only once a month in the middle of the day, she noted, otherwise residents have to go to Crescent City to access those benefits, which is difficult for those without a car.

Gensaw also noted that there aren’t any stores in Klamath that accept WIC. Those stores are in Crescent City, she said.

“You have to figure out how to get to town and lug those groceries back and forth,” Gensaw said. “Transportation is a huge (obstacle).”

Communities across the country thrived on small grocery stores not too long ago, Saulsbury said. Now, small markets can’t survive unless they’re in a largely populated community, she said.

However, even in urban areas, small markets struggle currently.
Josh Norris, a planner works with the Yurok Economic Development Corporation, which operates Pem Mey Fuel Mart, said sustaining a market with the variety people have come to expect will be difficult for Klamath.

Josh Norris said he was exposed to the issue of food scarcity as a teacher at Klamath River Early College of the Redwoods, a charter school that opened in the community in 2005. At the time, though there was Klamath Market that sold a lot of dry goods, there weren’t many places for fresh foods, he said. The community was didn’t have many commercial kitchens, he said.

Many of the barriers to the community being able to sustain a source of fresh affordable food is economic, Norris said. Klamath Market’s owner closed the store in 2006 because he didn’t have enough customers to keep it open, he said.

“That’s sort of the story here,” Norris said. “A Market that serves fresh produce usually can’t afford to keep the store open because of generally having to purchase items at a retail store in Crescent City or in Humboldt, and they purchase them at retail prices. They hike up the prices, plus the transportation costs, and folks just find it cheaper to drive to town.”

Brigette Norris noted that climate change and the mismanagement of the federal lands around Klamath in the last few generations makes it difficult to harvest wild foods that are staples of the Yurok diet.

When it comes to opportunities Brigette Norris suggested looking at the long view. The youth can help address these issues if their parents encourage them to look to their grandparents and how they approached food, she said.

Learning to produce food and sharing it with each other will ensure the community doesn’t have to rely on retailers, Norris said. It would help solve the problem of food scarcity and promote health, since people would know where their food comes from.

“We could also encourage an educational pathway,” Brigette Norris said. “If they take an interest in agriculture, then they put that into practice and hopefully they won’t want to leave.”

Gensaw said many native families smoke fish, whether it’s salmon, eels or sturgeon, and keep a store of it at their homes while making hauls to Winco and Costco in Eureka. But, she said, people’s modern day schedules don't always line up with being able hunt, gather or fish. 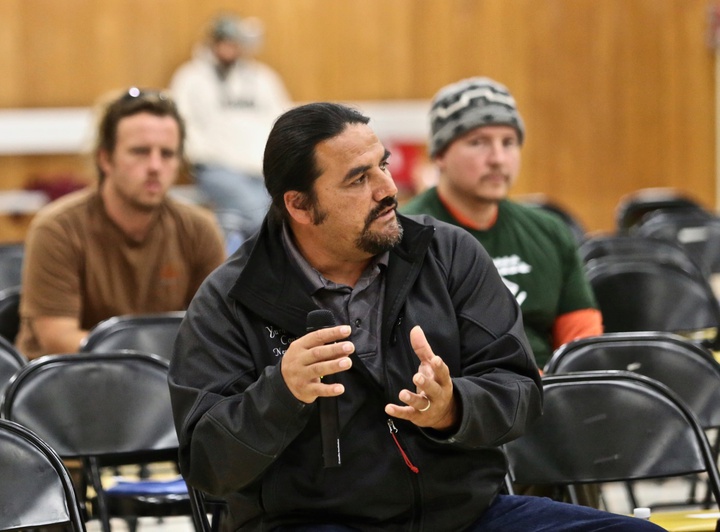 The opportunities for improving food security in Klamath are two-fold, Gensaw said. Maintaining access to gathering and hunting grounds as well as fishing spots is important, she said. Making sure your kids are eating actual food instead of processed items is also important. If parents rely on WIC or food stamps to feed their kids, but can’t get fresh foods, that should also be remedied, she said.

But, in communities, getting along with your neighbors and being willing to share and give is a matter of survival, Gensaw said. She noted that many families are gathering acorns and the season for eels is coming up. Gathering acorns, for example, is labor-intensive and once you have a supply, you have to process them so they can be eaten. Years ago, in a Yurok home, this was a team effort, Gensaw said.

Though today’s community structure is different, Gensaw said, she’s excited to see different families taking on different roles, whether they are good at or have time to hunt or fish, in the community and sharing the fruits with each other.

“I see that as the opportunity,” she said. “I see my community — they’re hunters, they’re givers, they share everything they need, (they) bring stuff to the tribal office at funerals and potlucks and receptions — I see those as opportunities.”

When the discussion included members of the audience, Yurok Tribal Councilman Ryan Ray, who represents Requa, building an economy when much of the population of Klamath are seasonal is difficult. He said it would also take a lot of lettuce and tomatoes for someone growing them in the community to make a profit.

Ray also said while educating kids about their traditional food, where it comes from and how it’s gathered is important, that’s also difficult. Many aren’t interested in eating salad or kale, he said.
While bringing a grocery store to Klamath sounds like a simple solution, Ray said housing, particularly affordable housing, is needed to bring the customers that would frequent the store.

Instead of a new store, Ray said, expanding Pem Mey may be part of the answer to addressing food scarcity.

Ben Zumeta, the food forest program coordinator for the Community Food Council, asked if teaching the principles of permaculture to local youth might help increase food access in Klamath. Zumeta, is spearheading a food forest project at Margaret Keating Elementary School in Klamath, asked if there would be an interest in that.

Brigette Norris, who had worked with Zumeta on Margaret Keating’s food forest project, said she wanted the food forest to include plants indigenous peoples use for basket weaving or berries such as salmonberries and Pacific blackberries. In addition to getting youngsters excited about the food forest, she said, parents have to be involved too.

A proposed program also needs to show it has staying power for it to work in Klamath, Brigette Norris said.

“I think that too many times people have come in to this community from outside and said ‘we’ll help you,’” she said, “(or) they come in and say ‘we’re going to fix all your problems’ and then they leave. You have to prove yourself, that you’re going to stay here.”

Do you have questions about what you just read or a personal story about this issue? Share your feedback here and reporter Jessica Cejnar will get back to you.