Rebuilding A Member of The Family: Yurok Canoe Takes Shape For Spring Tours 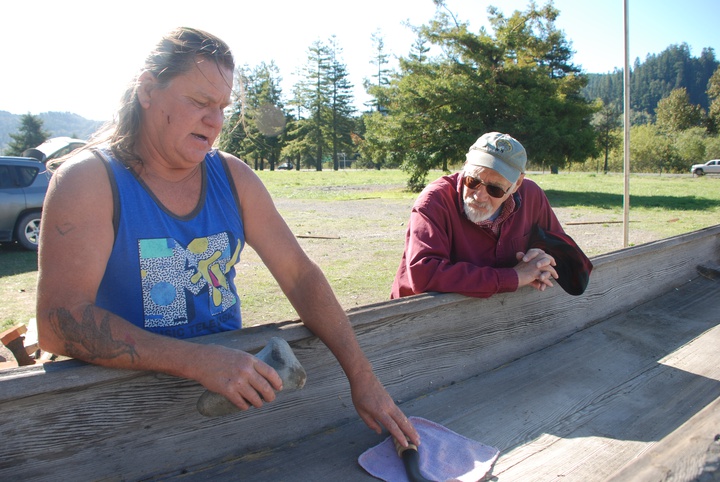 David Severns says he’s the youngest canoe builder.
Now 56-years-old, Severns said his teacher, George Wilson, told him to take notes and draw pictures “‘cause I ain’t going to be around forever.’”

On a sunny Friday morning across the street from Yurok Tribal Headquarters in Klamath, Severns and his apprentice, Pete Thompson, used chainsaws to craft the first vessel the tribe will use in its new redwood canoe tours this spring. Severns’ first craft, created by hand under Wilson’s guidance, sat under a tarp nearby.

A redwood dugout canoe is a member of the family in a Yurok household, Severns said. It has a nose, heart, lungs and kidneys. Whoever sits in the chair is the boss who is responsible for everyone in the vessel. It’s also one of the highest prices a Yurok family can pay for a dowry, he said.

“Others are in their 70s and 80s. One of them’s 90-something,” he said, adding that Wilson learned canoe building from the late William “Bunny” Van Pelt. “Kids come over from the Boys and Girls Club… I let everybody chop on it because they may never get the chance again.”

The tribe plans to begin its redwood canoe tours starting in May if weather and river conditions permit, said Yurok planner and project manager Josh Norris. Two-hour tours will cost $125 include a cultural presentation about the canoe’s significance to the Yurok people, a stop along the way and possibly storytelling, he said.

“We’re still putting it together, but it’s a pretty widely popular idea,” Norris said. “We have folks from all over the world who are interested in participating when it’s up and running.”

According to Norris, the idea to introduce visitors to the Klamath River via canoe was born in the Yurok Tribe’s transportation department and was an effort of the current chairman, Joseph L. James, and department employee Isaac Kinney.

In 2015, the tribe conducted a feasibility study, interviewed some tourists and, when it looked to be a good idea, completed a business plan, Norris said. He said a Maritime Heritage Grant from the National Parks Service helped get the project started.

The tribe is also developing partnerships with Redwood National and State Parks and the U.S. Forest Service to access redwood logs to build their canoes, though that hasn’t happened yet, Norris said.

“The vision is to make this more of a destination location where people will come for the attractions and stay and eat,” he said. “We’re in the heart of the redwoods here and often people just go on through. There’s not a lot else to do.”

The Yurok Tribal Council awarded a contract to LACO Associates to develop a business plan for the Redwood Canoe Adventure Tour Project, the tribe posted on Facebook in May. The tours will be run in partnership with the Yurok Economic Development Corporation, which also operates Redwood Hotel Casino, Klamath Jet Boat Tours and the Yurok Country Visitor Center.

The redwood dugout canoe represents the Yurok peoples’ connection to both the trees and the river, Norris said. It’s part of a reciprocal relationship they want to relay to folks who are visiting the area.

“It provides for us and, in return, we respect and honor it and that honor is as a living being; they’re a member of the family,” he said. “Traditionally, you would take that quite literally.”

The tribe’s goal for the endeavor’s first year is to have four canoes offering four tours, Norris said. Each year they would add a couple more. Eventually the tribe hopes to have 10 to 12 canoes in operation. However, Norris said, canoe building isn’t an exact science.

“It’s not like you can put (it) on a production line,” he said. “There can be a lot of unanticipated issues that arise because each log is unique. There’s always a danger of running into knots or cracks. It’s unpredictable… And they’re also really expensive. Transporting them, getting them cut to size, all of that business, it’s a pretty huge undertaking.”