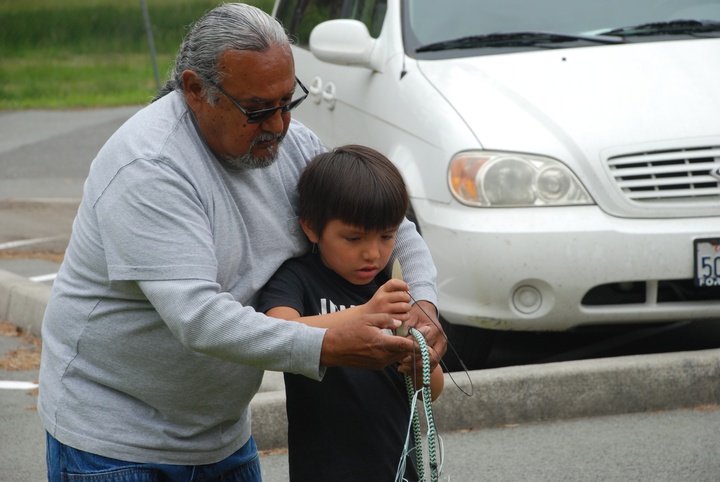 David Gensaw Sr. shows Dean McCovey how to repair a gill net at Margaret Keating Elementary School's Au Minot Day celebration in May. Gensaw, a Yurok Tribal member, demonstrated how his people use gill nets to harvest salmon from the Klamath River.

We want to know how you get your food.

According to the U.S. Department of Agriculture, a food desert is an area with limited or no access to fresh produce within a one-mile radius in a city or a 10-mile radius in rural areas. This applies to most Del Norte County residents outside of Crescent City, but in Klamath with the closest supermarket roughly 20 miles away, there’s little question the area is a food desert.

“We don’t have access,” said Susan Masten, a former Yurok Tribal Council member and owner of Steelhead Lodge in Klamath Glen. “When you’re trying to eat healthy it makes it really challenging because you need your fruits and vegetables and if you can only get enough fruits and vegetables to last four days then you got to come back to Crescent (City) to get more food. Sometimes it’s a week or two before you can get in.”

Many Klamath residents, primarily those in the tribal community, garden, hunt deer, fish for salmon and eel and gather acorns and berries to feed their families. Those lucky enough to have a car drive to Grocery Outlet, Safeway or Walmart in Crescent City. Some even go to Grants Pass or Eureka. Amber Rodelander and her husband Michael make the three-hour roundtrip drive to Eureka and back about every five weeks to visit Winco, Costco and Cash & Carry. For Michael Rodelander, a former mechanic who broke his back twice, has osteoporosis and bone spurs and is on disability, these shopping trips leave him exhausted for at least two days after.

“The kids can’t even go help because we need that back seat,” Amber Rodelander said, adding that every space of the family Prius is packed with meat, vegetables, toilet paper and other supplies for the month. “So they can’t even help us.”

Those who don’t have a car are left with two options for food shopping — Pem Mey Fuel Mart or Woodland Villa. For those living in Klamath Glen, not having a vehicle means a three-mile walk down Route 169 to Pem Mey in the town site, resident Chrystal Helton notes.

“No one wants to walk that road, it’s a death trap,” she said. “You’d have to walk a seven-mile roundtrip to access Pem Mey from the Glen.”

Out of 28,610 people that call Del Norte County home, 22 percent of adults experienced poverty in 2016, according to statistics from the California Center for Rural Policy at Humboldt State University. The statewide povery rate in 2016 was 14.7 percent.

In a draft food systems analysis of Del Norte, CCRP reported that 16.8 percent of the population is food insecure. In 2014, 29.7 percent of households struggled to get enough to eat.

Organizations like the Community Food Council and Rural Human Services have been working for years to make sure Del Norters get enough to eat.

According to Gloria Martinez, who manages the Community Food Council’s Pacific Pantry, more than 500 families and 1,000 individuals received food in March and April.

For the past three months, reporter Jessica Cejnar, a 2019 fellow with the University of Southern California’s Center for Health Journalism, has interviewed and surveyed Klamath residents about the challenges their families deal with on a regular basis when it comes to accessing fresh, healthy food.

Her goal was to write a series of articles in the Del Norte Triplicate outlining those challenges and how families are meeting them. With the Triplicate’s recent change in ownership, Cejnar will publish her fellowship project at The Wild Rivers Outpost and is re-launching the survey so more people can guide her reporting.

Is it difficult get food where you live? In addition to grocery shopping, how else do you get your food? Have you developed unique ways to feed your family and if so, what are they? And, finally, how can local policymakers, including county supervisors and Yurok Tribal officials, make this easier?

We won’t publish any information you share without your permission. If you want to talk via phone, text or email, call or text (707) 951-4908 or email jc.food.project@gmail.com. People can also participate in the conversation on Facebook at this link.

Jessica Cejnar reported this story as part of her University of Southern California Annenberg Center for Health Journalism 2019 California Fellowship.