« Hey, You! Yeah, You on the 97000 Block of Dodge Avenue in Brookings! You May Have to Boil Your Water for a While 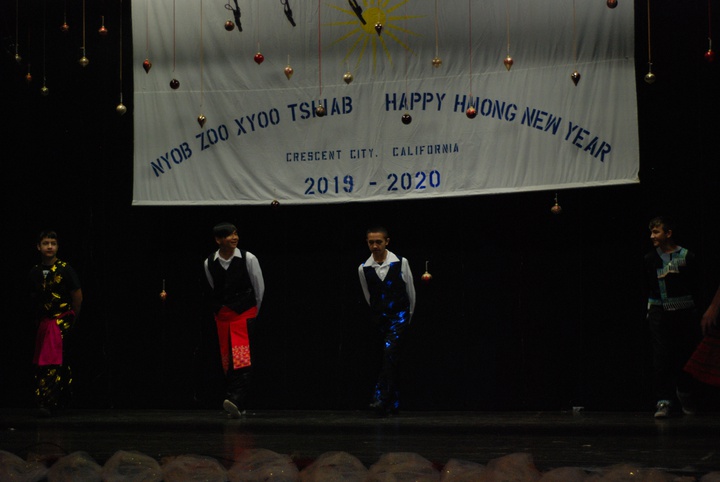 Del Norte’s Hmong families have butchered a cow and expect to spend much of this evening wrapping some 2,500 egg rolls for their annual New Year celebration on Saturday.

Both a family reunion and a way to share their culture with a broader audience, Crescent City’s Hmong residents will don traditional costumes, dance and sing, and feed, anyone who walks into Crescent Elk Middle School.

Lunch is at noon; the singing and dancing start at 10 a.m., said Khou Vue, a teacher and one of the founders of the Hmong Cultural Center of Del Norte County, California.

“In Hmong culture we don’t have any holidays besides this one,” Vue told the Wild Rivers Outpost on Friday. “In the old days, every one farmed. By the time people finished harvesting, they took a few days to celebrate the ending of the old year and the beginning of the new one.”

The Hmong people celebrate their new year based on the lunar calendar, Vue said. Celebrations start as early as October and continue through November and December. In larger communities, such as Fresno, these celebrations are huge festivals with music and food and merchandise vendors, he said.

Roughly 50 to 60 families call Del Norte County home, Vue estimated. They’re relatives of veterans who aided the United States during the secret war in Laos between 1961 and 1975, though Vue told the Wild Rivers Outpost that the number of families in Del Norte has decreased in the last two decades.

Many are adults with families of their own who have moved away, Vue said.Those who stayed are now comprised of three to four individuals when in previous years a family would be made up of 10 or more people, he said.

As a result, Vue said, since the annual New Years celebration in Del Norte County is a team effort among the Hmong community, the number of people attending has decreased as well.

“It’s a struggle to try to provide lunch,” he said. “But now the larger community has reached out more. We’ve received donations from the generous community.”

Those donations include grants from the Wild Rivers Community Foundation, the Humboldt Area Foundation, the California Endowment and Building Healthy Communities, Vue said.

According to Vue, Hmong communities in other areas try to coordinate their festivities to avoid overlapping with another community’s celebration. People would hold a celebration in their village and travel to others to continue the party, he said.

Many Hmong people could spend two to three weeks ringing in their new year, Vue told the Outpost. Some areas with large Hmong populations allow their teachers and students to take time off to celebrate, he said.

“It’s a homecoming,” Vue told the Outpost. “Everyone returns to celebrate. It’s a reunification. Children come back to their parents’ home, but the spirits come back into the home.”

Crescent City’s celebration usually includes a volleyball tournament with players coming from as far away as Seattle and Portland, though the forecasted storm may put a damper on that, Vue said.

Vue said anyone who wants to perform anything is welcome. It can be traditional or modern, he said.

“We want everyone to attend,” he said.