DNTA Members Authorize A Strike If Settlement Not Reached Next Month; DNUSD Looks To Humboldt For Subs 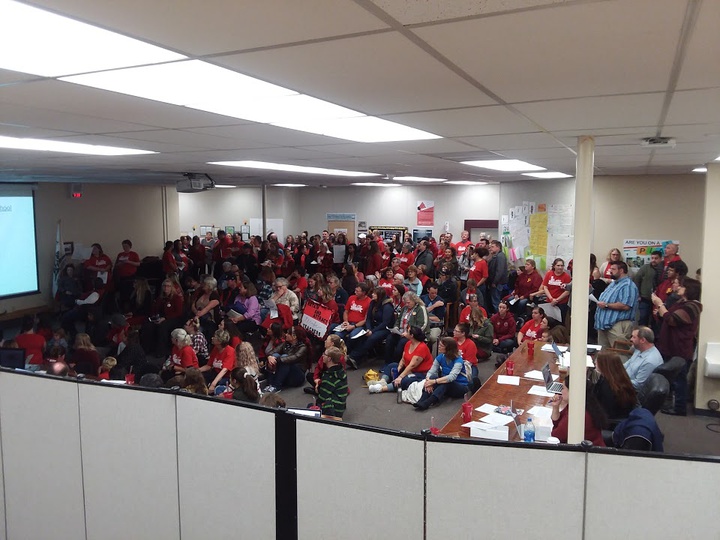 Roughly 300 people showed up to support teachers at a district board meeting last week. Photo: Courtesy of Marshall Jones

More than 90 percent of Del Norte Teachers Association members authorized the union’s executive board to call a strike if a settlement isn’t reached with the school district.

“They offered the same thing they offered before,” Jones told the Outpost on Friday. “it was a short meeting.”

DNTA members voted 90.1 percent in favor of authorizing its leadership to call a strike, according to a Friday news release from the California Teachers Association. In the news release, Jones stated that there has been a 47 percent teacher turnover in the last three years and 25 percent are eligible to retire. Most are considering retirement due to “poor treatment by district management.”

“There have been four resignations in the last few months because of the way teachers are being treated,” Jones said in CTA’s news release. “The last one was (Thursday).”

DNTA negotiators are lobbying for a 3.26 percent raise that reflects a cost of living adjustment in state funding the school district is expected to receive, Jones told the Outpost.

The district is currently offering teachers a 2 percent salary increase, Human Resources Director Coleen Parker told the Outpost on Thursday. Of that offer, 1 percent is retroactive and the other 1 percent is contingent on enrollment staying static, she said.

As it stands, teachers would get a 2 percent increase “now no matter what” under the district’s offer, Parker said. But 1 percent might be taken away from the salary schedule during the 2020-21 fiscal year if enrollment doesn’t either stay static or “decline too much,” she told the Outpost.

According to Parker, that the district is currently waiting on a report from a neutral third party that met with both parties during the fact finding phase of contract negotiations. Both groups will get the report in draft form and will be able to come back to the table to continue negotiations, she said.

Parker said the neutral party shared her findings with the district and DNTA representatives, but until the report is released those findings are confidential.

According to DNTA’s lead negotiator, Paige Thompson, however, though the district invited union representative back to the bargaining table on Wednesday, it refused to commit to any financial proposals in writing.

“The district made it clear they would like to wait for the fact finder’s report in January,” Thompson told the Outpost via email on Thursday. “We are dumbfounded as to why they invited us to the table when they clearly had no intention of working with us.”

Meanwhile, Del Norte Unified School District has reached out to the Humboldt County Office of Education for substitutes to fill in for teachers should they strike. Last week, following a school board meeting that drew more than 300 community members, Jones said he intercepted a district communique that stated district officials had reached out to Humboldt County for substitute teachers.

“Their plan was to bus them up here,” Jones told the Outpost last week. “It went on to say that they’re saving $366 on average per day and… that would be a good starting point to offer for subs.”

The communique Jones intercepted was a confidential document sent to DNUSD principals, Parker told the Outpost. She acknowledged that she has reached out to the Humboldt County Office of Education to see about using their substitute teacher pool if a strike occurs.

Though bussing substitute teachers to Del Norte from Humboldt was never mentioned, Parker said $366 is the average daily rate a teacher in Del Norte County receives. That rate will appear in a resolution as the district’s recommended compensation for substitute teachers to fill in during a DNTA strike, she said. That resolution will go before the DNUSD Board of Trustees on Jan. 9, Parker told the Outpost.

“Because you’re not paying teachers when teachers strike, you can pay your subs at a higher rate to keep the doors open,” she said. “We don’t know how many subs will be needed because the union will have to vote for a strike and we don’t know if htey will get enough of their membership to want to strike. They have to give us three days notice that they’re going to strike and then we have to prepare for it.”

Parker noted that not only does the district have to keep on educating local students even if teachers strike, it also feeds them..

“We’re going to keep our doors open one way or another,” she said.

In CTA’s news release, Jones states that the strike authorization comes roughly 11 months of negotiations that resulted in both parties reaching an impasse. Once the fact finder releases her report on Jan. 14, the contract bargaining process will have been exhausted and the union will be authorized to strike, according to the news release.