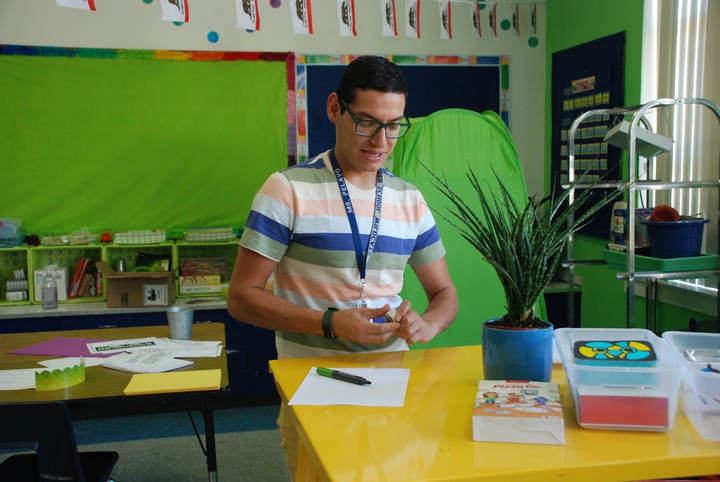 Two weeks before his colleagues demanded a pay raise, Luis Pelayo reminded trustees that he and his fellow teachers advocate for their students even when school’s not in session.

Despite being off for the summer, the fourth grade teacher at Smith River School, told the Del Norte County Unified School District board that his colleagues have been seeking help to fund classroom projects through a program called Donors Choose.

Donors Choose is a crowdfunding site for teachers that allows them to obtain materials that are beyond their classroom budget, said Smith River School sixth-grade teacher Laura Chandler. In addition to allowing the community to donate, it also connects teachers with large foundations and companies such as the Bill and Melinda Gates Foundation and Chevron, she said.

Chandler said she was introduced to the program by her colleague Knela Newton. Chandler noted that Chevron has fully funded two of her previous mini grants, enabling her to order $1,000 of classroom materials.

“The thing is you do that on your own time,” she said. “I was able to get really cool flexible seating for my class. Another one I wrote was to get (Science Technology Engineering Art and Math) materials for our students.”

Pelayo said at least $3,000 of the materials in his classroom came from Donors Choose. He said the community rallied behind his first Donors Choose grant, which was for Chromebooks.

Both Chandler and Pelayo said that as the Del Norte Teachers Association and Del Norte Unified School District negotiate a new 2019-2020 contract, it’d be nice for the school board to recognize the extra work they and their colleagues do.

“We’re writing grants on behalf of the district,” said Pelayo, who’s on DNTA’s negotiations team. “If I were to move to a different area, all of that material would stay. That’s some savings right there.”

According to Assistant Superintendent of Business Jeff Napier, school principals give a minimum of $500 to classrooms at their campus for extra material. However, because the district is required to provide a “free and appropriate public education,” it must provide paper, pencils and curricula. Meanwhile, teachers can use their classroom budget for extras such as school field trips or special materials, he said.

Napier said if teachers are paying for special materials and school field trips out of their own pocket, they can get reimbursed. Like Pelayo and Chandler, he noted that any donations of materials or grants teachers receive becomes district property.

“Only the school board can accept donations; sites can’t accept donations,” he said. “If they’re donating, technically they have to donate to the school district ‘cause the board is the only legal authority that can accept a donation on behalf of each school and that has to do with getting a tax write-off for it.”

However, according to Paige Thompson, a fifth-grade teacher at Mary Peacock Elementary School and DNTA’s lead negotiator and grievance chair, in addition to applying for grants through Donors Choose, teachers come up with other creative ways to fund special materials or even field trips.

This includes things like holding a read-a-thon or selling candy bars, Thompson said.

Thompson said she asked her colleagues and they can’t remember the last time classroom budgets were increased. Some teachers will partner with another class to go on a field trip, Thompson said.

“I teach at Mary Peacock and we have an amazing parents club,” she said. “They do a great job of having book fairs to raise money for us. They do a lot of fundraising for the 5th-grade finale.”

“The community, I feel like, is supporting classrooms,” Thompson said. “Even friends from Georgia where I grew up. We’re really trying to get regular people to support our classrooms.”

Chandler said one of her goals is to take her class to the Shakespeare Festival in Ashland. But, she said, she would need roughly $700 for bus transportation for the trip.

“That wipes out your class budget,” she said. “So how are you going to offer these enriching experiences? It takes a lot of legwork and communication, especially if you want to do it in conjunction with other classes.”

The district and DNTA are at an impasse in contract negotiations for the 2019-2020 school year. Conflicting over proposed salary increases, the district is proposing a 1 percent raise or applying that raise to the health and welfare cap it offers to teachers. DNTA is arguing for a reduction in professional development days and adjunct hours in addition to a 1 percent raise. This would result in a salary increase of about 3.35 percent, according to Thompson.

Children return to school between 8 and 8:30 a.m. Monday.