« How Much Could PG&E’s Rates Rise? What You Need to Know 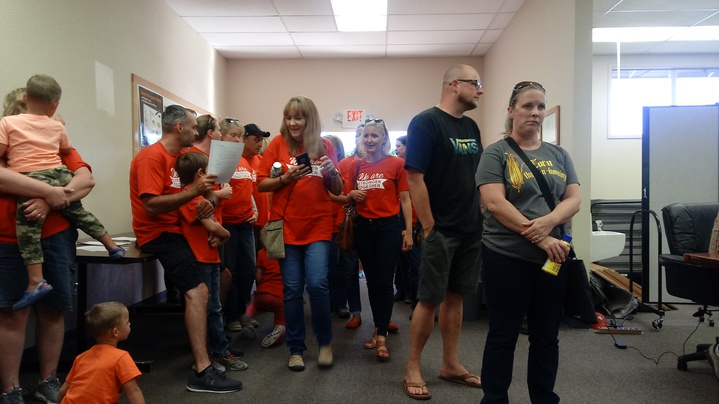 Local teachers demanded trustees to send district staff back to the bargaining table, saying Thursday that offering to increase salaries by just 1 percent was unacceptable.

The district offered to either increase teacher pay by 1 percent or apply that 1 percent to the health and welfare cap, saying an expected 3.2 percent cost of living adjustment wouldn’t be enough to raise salaries further.

Teachers union representatives say they’re willing to take a 1 percent salary increase if the district agrees to eliminate enough professional development days and adjunct hours to equal a 3.35 percent pay raise. But, they say, the district refuses to budge on its initial offer.

“Work with us,” DNTA President Marshall Jones said during a public comment period that lasted about an hour and a half at Thursday’s meeting. “Do the right thing by instructing your bargaining team to go back to the table and demand they work with us. They work for you, you don’t work for them. Don’t be swayed by fear tactics that a recession is looming.”

School district officials and the DNTA are at an impasse in contract negotiations for the 2019-2020 school year and met with a mediator on Aug. 7. Unable to make progress in mediation, both parties are now in the fact finding stage, said Paige Thompson, the union’s grievance chair and lead negotiator.

According to Assistant Superintendent of Business Jeff Napier, once both parties enter the fact finding stage, each side chooses a representative and agrees upon a third impartial person to sit on a panel. Both sides will present their arguments to the panel and it will write an opinion on what the outcome should be, he said.

According to the school district’s last proposal, issued June 28, officials either increase the salary schedule by 1 percent, which would be $186,266, or to apply that amount to the health and welfare cap.

“We feel strongly that lower class sizes and reduction of combination classes is better for students and teachers,” DNUSD’s proposal states. “But this means we employ more staff than we would if we staffed the contract maximums of K-8 31:1 and 9-12 35:1.”

The district’s proposal states that if the DNTA chooses to apply $186,266 to the health and welfare cap, that cap would increase to $11,591.

DNTA went along with the proposed 1 percent increase in pay. The union also proposed lowering the health and welfare cap to $795, decreasing the number of professional development days by three and reducing the number of adjunct duty hours by 12, according to Thompson. This would equate to a 3.35 percent pay raise, she said.

“We’re getting creative,” Thompson told the school board Thursday, noting that teachers will start seeing students Monday without a ratified contract. “You say you don’t have the money; alright, give us back our time.”

“We can still be negotiating if we choose all the way through the fact-finding process,” he said. “There could be an agreement prior to the fact finding report being issued.”

He said a $223,000 Career Technical Education Incentive Grant from the state as well as an increase in unduplicated student enrollment and a reduced Public Employees Retirement System rate contributed to the decreased deficit.

On Thursday, DNTA members said if the district has about $4 million in its reserves and is receiving a 3.2 percent cost of living adjustment, it can afford to increase salaries by more than 1 percent.

“Yesterday we heard how we are the most valuable part of the educational equation,” said Del Norte teacher Karen Crist on Thursday. “I’m old. Words are cheap. Actions matter, and 1 percent is offensive.”

“I’m slated to have 206 freshmen and sophomores walk through my door on Monday,” Young said. “That’s worth more than 1 percent.”

Jones, who gave his DNTA report after Thompson’s statement, said the district has refused to budge from its 1 percent offer in more than six months.

“I can remember even back in the worst worst worst of times, Del Norte Unified has valued teachers,” he told the school board. “All we’re asking is for the state-given COLA. A wage that matches the inflation that the state has given. We’re not asking for a surplus, just what keeps up with inflation.”