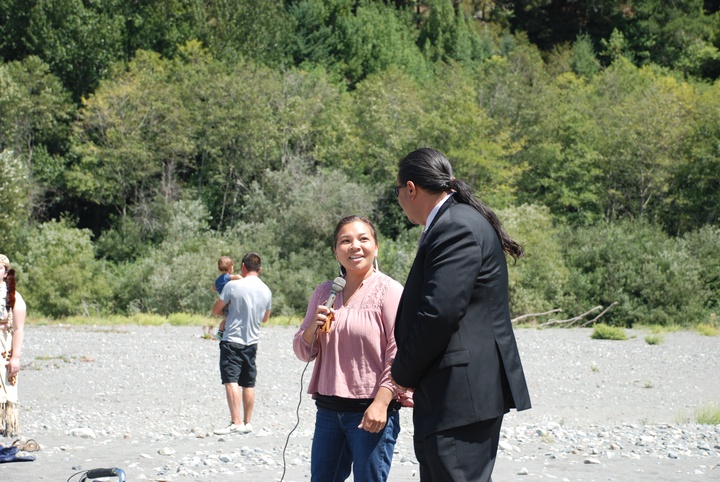 Victoria Carlson and Javier Kinney sing a Brush Dance song during a celebration at the mouth of Blue Creek on Monday. Photo: Jessica Cejnar

Per-gish Carlson was within sight from his father’s house, where Blue Creek meets the Klamath River, where he recounted a story of Troy Fletcher and his ugly fish.

One day, Fletcher and Carlson had dropped a group of conservancy representatives on Blue Creek and stayed behind and fished. The tribe's executive director hooked onto the “ugliest blackest fish” Carlson had ever seen.

Carlson said he urged Fletcher to throw the fish back without snapping a photo, but Fletcher refused.

“He goes, ‘Per-gish, this fish is a warrior. I want to take a picture of him he’s like me,’” Carlson said. “He held it up, I took the picture of it and he let it go. It was waiting to come up this creek. He was the one who started it all.”

Carlson, who owns Blue Creek Guide Service and whose family has its roots in the area, said it was Fletcher who included him in the tribe’s decade-long effort to regain ownership of that watershed and the land surrounding three other salmon-sustaining streams.

On Monday, nearly four years after Fletcher’s death, the Yurok Tribe along with representatives from Green Diamond and Western Rivers Conservancy celebrated the partnerships that led to that acquisition being realized.

They were joined by representatives from several nonprofit organizations and government agencies, including those who helped raise the $60 million that paid for the acquisition. The Yurok Tribe secured $10 million toward the acquisition of its ancestral lands, said Western Rivers Conservancy vice chair, Bill Brown.

“Seven state agencies, three federal agencies, 17 foundations and over 3,000 individual donors came on board to support this effort,” Brown said. “The diversity of support illustrates the project’s importance: The determination of the Yurok people, the commitment of the Western Rivers Conservancy and the very long patience of Green Diamond and its long-term commitment to forest stewardship and the environment.”

The partnership between Green Diamond, the Western Rivers Conservancy and the tribe began in 2006. The conservancy and Green Diamond held the land while the nonprofit and the tribe pursued funds for the acquisition. Those dollars came from a variety of sources including the Hoopa-Yurok Settlement Act, the New Markets Tax Credits program, the Kendeda Fund, the David and Lucile Packard Foundation, the California Coastal Conservancy and other private, state and federal grants. The sale of carbon offsets also contributed to the acquisition.

However, according to Tim Hayden, the tribe’s Natural Resources Division lead, there’s still a lot of work to do. Reacquiring the land is a first step, Hayden said.

“The history of the Yurok Tribe is filled with tragedy and a lot of that is the loss of their land,” he said, adding that regaining its ancestral homelands is part of the Yurok Tribe’s Constitution. “For us, owning and actively managing our land, it’s a way of enacting our sovereignty. We’re asserting our self determination.”

According to Hayden, 15,000 acres of the acquisition will become a sanctuary for salmon and other wildlife, including the endangered Humboldt martin, northern spotted owl and coho salmon. The goal, he said, is to restore an old-growth forest ecosystem.

Meanwhile, much of the acquisition will become the Yurok Tribe’s community forest. This includes parcels in the Pecwan, Ke’pel and Weitchpec Creek watersheds. In addition to managing the area for sustainable timber harvest, Hayden said, tribal members will be able to access basket-weaving materials and traditional foods such as berries.

Plus, Hayden said, the tribe will address climate change through carbon sequestration.

The headwaters of Blue Creek is also among the tribe’s most sacred sites, said Gene Brundin, a member of the tribe’s cultural committee. The stream begins at a place called Elk Valley near Chimney Rock and its cold water ensures the viability of the salmon runs, he said.

The tribe reacquiring that land will be beneficial for porcupines, whose quills are essential to basketmaking, Brundin said. Tribal members will also be able to access bear grass, hazel and other plants that weren’t of commercial value to the timber companies that owned the land.

According to Brundin, timber companies acquired much of the land in the Blue Creek watershed between World Wars I and II. He said they purchased it from people who thought they had just sold the companies the rights to the timber and not the land itself.

Brundin said he hopes that by regaining the land it lost, the tribe will be ensuring the future for its young people.

Georgiana Gensaw and Victoria Carlson brought a group of girls, dressed in traditional regalia, to the mouth of Blue Creek. The older girls were dressed in ceremonial garb, Gensaw said, while the younger girls were wearing bark skirts and caps that would typically be worn for work.

To Gensaw, whose charges make appearances at ceremonies and demonstrations, Monday’s celebration was neither of those things. She noted that a lot of work went into the reacquisition of the Blue Creek watershed and said she and the girls she led wanted to show their respect.

“This is a very sacred place,” Gensaw said. “We wear our very best, our caps and beads on Sunday morning, (to) ceremonies or on our highest dance days. Everyone understands, this is a huge day for our tribe.”

“We share stories about Blue Creek,” she said. “How strong the people were — warriors.”

Victoria Carlson then sang a Brush Dance song her grandfather and aunts once sang, saying it was passed down from generation to generation, like the surrounding mountains.